A court in southern Rwanda was today forced to adjourn hearing the case of Dr. Leopold Munyakazi who vowed, as he shouted, that he would only return  to court before an impartial judge.

Munyakazi, 65, said the judge presiding over the Muhanga District Intermediate court had been paid by government which he claims is persecuting him and his family. He was deported from the United States in October last year to face several genocide charges.

Prosecution affirms that before and during the genocide, the academic was part of a group of intellectuals at the national university where he openly designed and disseminated ideologies supporting the exclusion of Tutsi in schools and employment.

Munyakazi also allegedly cooperated with the then Bourgmestre (mayor) Jean Mbarubukeye to mobilise mass killings in Kayenzi town, now part of Muhanga District. He was arrested after the genocide, then released on bail in 1999 with several restrictions as investigation continued, but he escaped to the U.S.

Following deportation, Munyakazi was detained at Muhanga Prison which is in the jurisdiction of Muhanga intermediate court. One other objection Munyakazi has maintained is that he is being tried away from Kayenzi, the supposed location of his crimes.

Appearing Wednesday, Munyakazi came with a huge file of documents. When he opened the file to make his defense statement, the judge refused to allow him read all the pages. As he spoke, Munyakazi was shouting at top of his voice, to which Judge Adolphe Udahemuka repeatedly warned the court would not tolerate.

The defendant was not done yet. “Instead of dictating to me the way I should conduct my defense, you rather let me go back to jail,” Munyakazi charged at the judge. 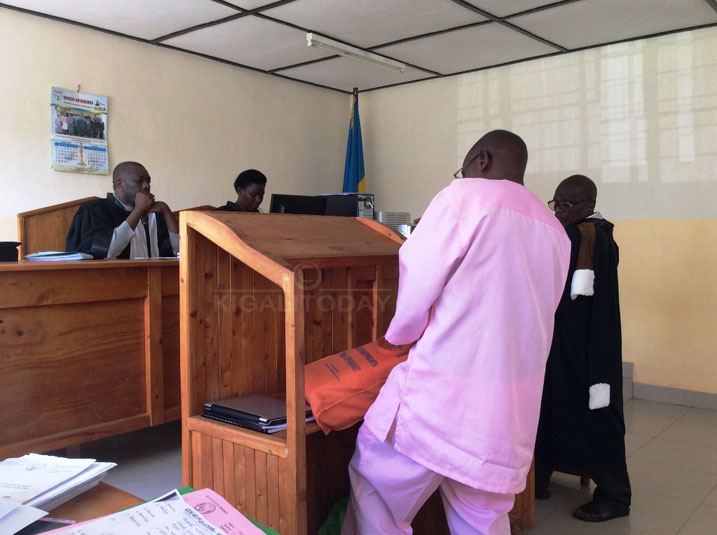 In another instance, the judge asked Munyakazi to file with court the list of his defense witnesses. Munyakazi fired back, telling the judge: “I would like to give you a piece of advice to leave this trial of jealousy which you don’t know much about. Leave the case to those who created it.”

According to prosecution, a new charge of genocide ideology has been added on the charge sheet. Apparently, while in jail during a Genocide commemoration period last month between April 7-13, Munyakazi repeatedly said: “They are lying at you. They want to drive you into fear and ignorance. I do not see the commemoration of Genocide against Tutsi lasting.”

Munyakazi has appeared in the same court several times and has maintained attacks on the judge, who has remained composed. In the court today, Munyakazi said he has 11 cases against the judge.

He said: “You are connected to the government. You are receiving orders from them. You cannot give me justice.”

With the defendant unwilling to cooperate, the presiding judge adjourned the case.

Meanwhile, nobody was safe from Munyakazi’s rumbling attacks including prison wardens and journalists.