When government-orchestrated massacres of a section of Rwandan society in the late 1950s started, relatives of the current speaker of Parliament Donatile Mukabalisa were among them.

She is a native of Bugesera region in eastern Rwanda, where the genocide against the Tutsi was first tested. 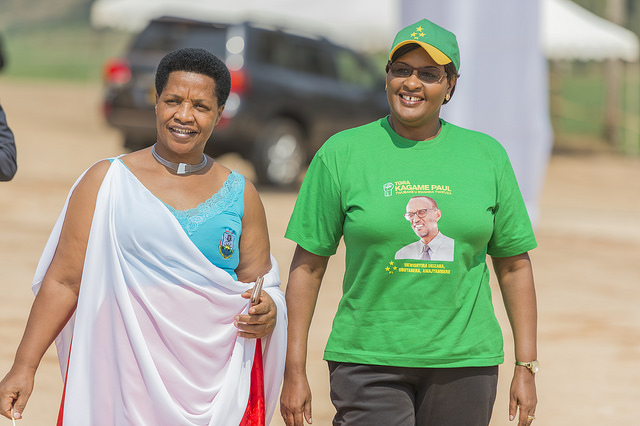 “They retrieved us from ditches,” said Mukabalisa, also leader of Liberal Party (PL), the third biggest party. PL joined coalition of 7 other parties to back Kagame for the August 4 presidential elections.

“As a woman myself, we know how far Kagame has brought us. Who would consider not voting for him?” asked Mukabalisa, as the thousands responded in unison: “No body!”

Mukabalisa could be speaking with a politician heart but the tearful tone in her voice made her statements ring some code with the crowd.

At all the past twelve rallies, rough indication shows the vast majority have been women. It is the women that have come forward to testify about how their lives have changed forever. 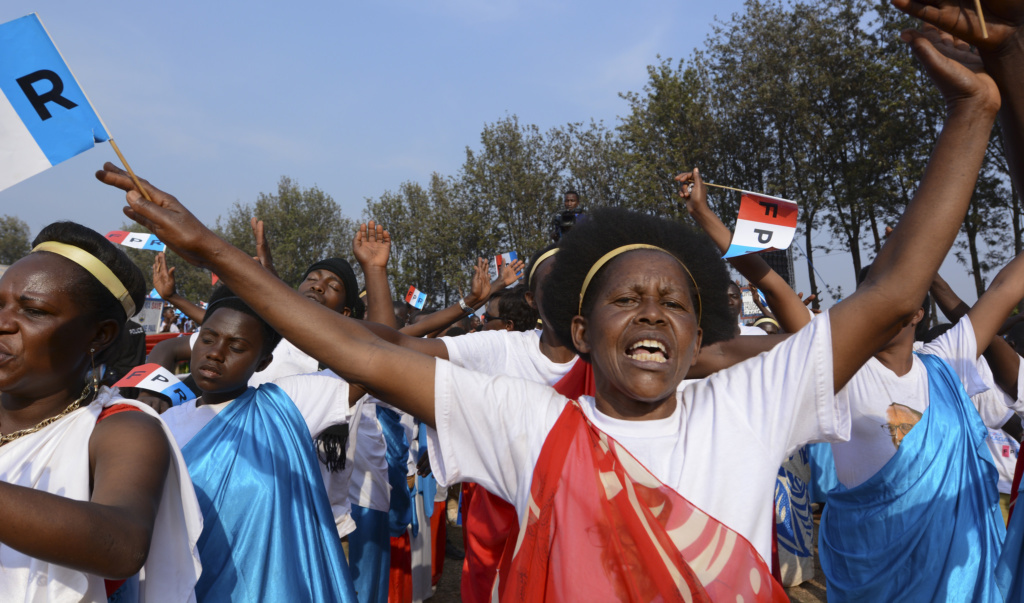 Women chants have swallowed up the males at the rallies. The elderly have gone an extra mile: finding Kagame on the set podium to dance alongside him. At all the rallies, there is specially designated area where the grannies sit on either mats or local traditional seats.

And when Kagame arrives, the spot he never misses is a stop to greet the frail-but heavily jovial women. There is this particular grannie from Nyamagabe district who hugged Kagame in 2010, and was back again in 2017. The huge crowd went into near-madness at sight of the scene at the Nyamagabe rally.

Whenever Kagame travels to that district or its neighbourhood, she is invited at his functions. She has a poetic song for him. Listening to the language of it, to a non-Kinyarwanda speaker, it may not ring as hard. But ask the Rwandans!

In case of conflict, men carry burden of proof 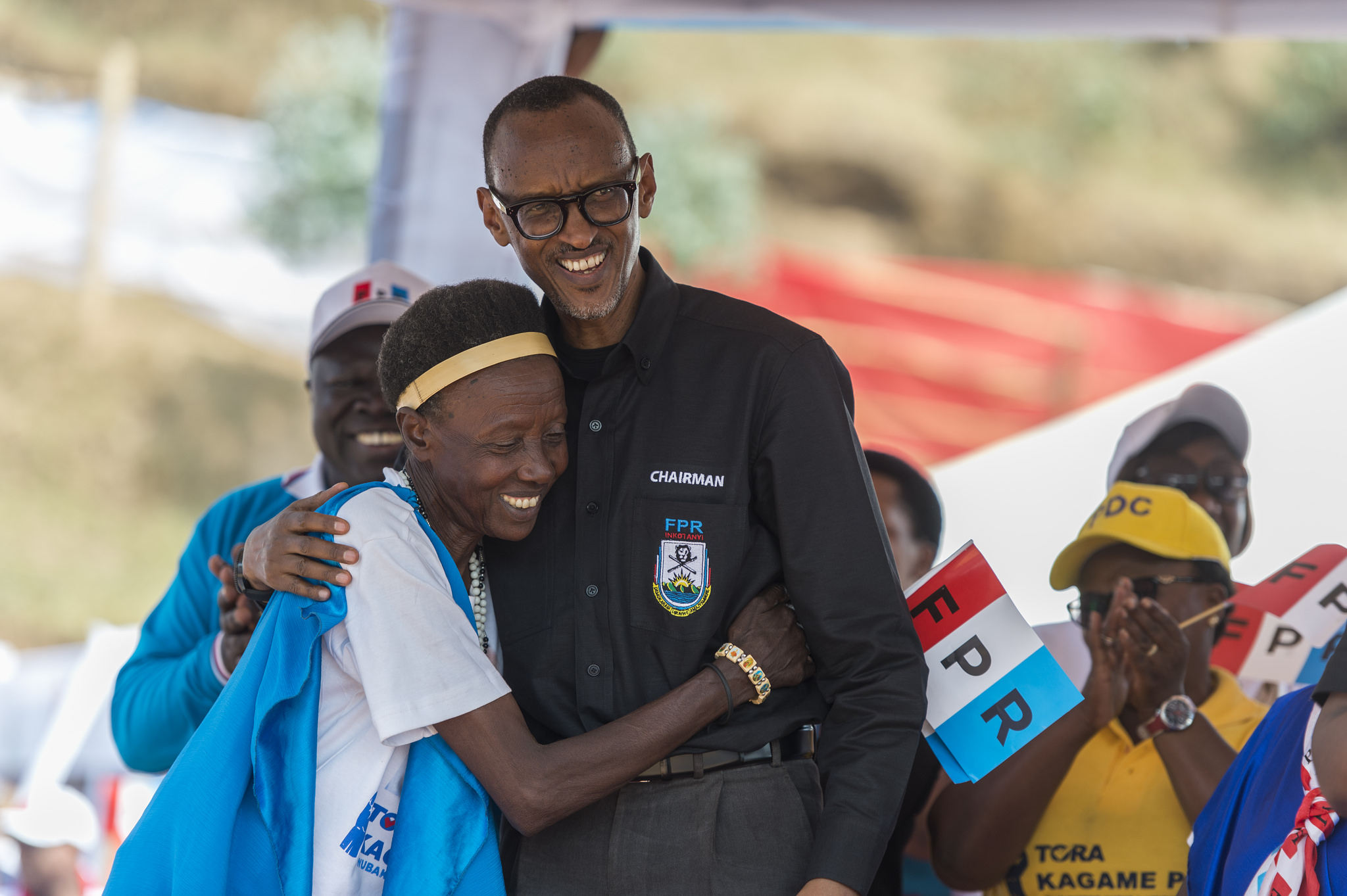 When Nyirabahutu picks the microphone to sing especially about Kagame’s leadership, everybody pays attention. Some are seen wiping away tears. She has a unique style of arranging all RPF manifesto and government programmes in her compositions. And by the way she never attended school.

But what is pushing thousands of women to rally behind Kagame? Some don’t even hesitate to call him “MY SON”.

Women make up 53 percent of Rwanda’s population. Under Kagame, laws have been put in place that safeguard women rights; that of recent men are complaining their wives no longer listen to them. In a case of abuse on a woman, the burden of proof rests with the man.

There is a constitutional stipulation setting a 30 percent quota for women at all levels of leadership. In the 80-member Lower Chamber of Parliament, women make up 64 percent.

The latest addition to the list of women benefits is a long and fully paid maternity leave. All employees in private and government sectors are required to put…. of their monthly income into a fund that pays the entirety of the maternity leave. 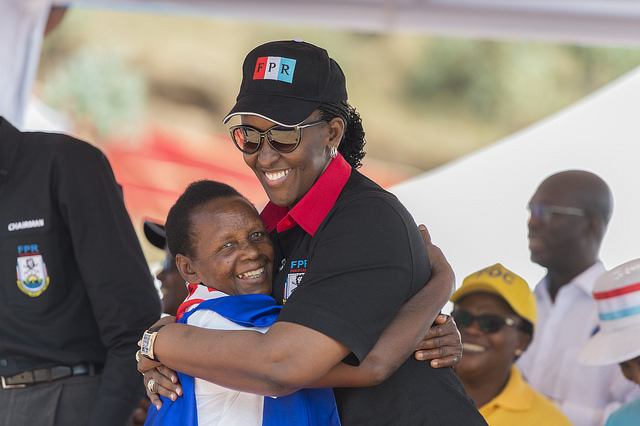 First Lady Jeannette Kagame has put all her weight to keep her husband the women darling. Her charity organization – IMBUTO Foundation has a host of programs targeting women and girls. She gives scholarships to hundreds of girls from disadvantaged families. Girls from her programs have often emerged among best at national exams.

For elderly genocide widows – who have lost everything in the genocide, Jeannette Kagame emerged as their biggest spokesperson. Imbuto is building special hostels across Rwanda to house these women.

Back to the campaign trail where RPF is selling the winning candidate, it remains a swim through. All RPF has to do is ferry him to the campaign rallies: the rest has been done deal.

At Kicukiro rally yesterday, a young woman who spent much of her childhood on the streets gave her past. In what left many cracking ribs, she said to Kagame: “My son, I have nothing to reward you.”

“As my visitor today, I failed to choose what to serve you. I wonder if I should serve you milk or juice…”

With support from various government programs, she has turned her life around, has several businesses to her name and very boastful of what she has achieved. You can understand her situation.

Back to the case of poetic Nyirabahutu and her troupe. To hire her cultural troupe to entertain at any event, charges go up to Rwf300, 000 ($360) for the few minutes she performs.

In other districts where the RPF candidate has held rallies, women have been in biggest attendance. 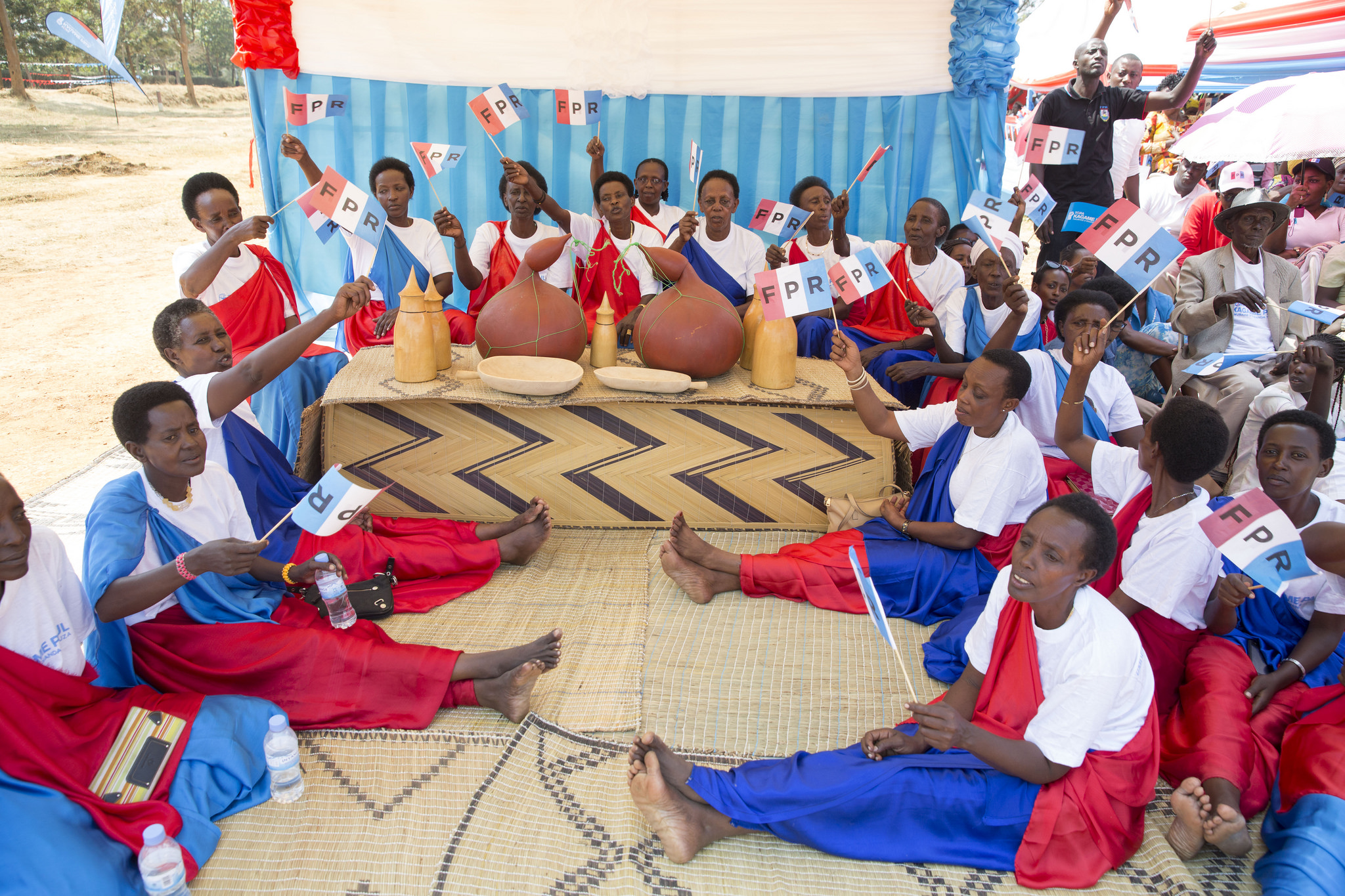 “I left my home at 1am to come and support Kagame, the man who has restored women’s dignity,” Anastasie Nyirabasare from Gatumba sector in Ngororero district shouted in KT Press recorders.

“The cow you gave me reproduced several times which allow me to give out the calves to my neighbours,” referring to the one-cow-per-family program initiated by Kagame.

Eugenie Nyinawumuntu who arrived at Mayange site in Bugesera district to support RPF candidate, told KT Press that the day was a party day.

“… I always tell my grandchildren. My worry is whether they will have chance to have many more leaders like Kagame,” the 60-year-old said. 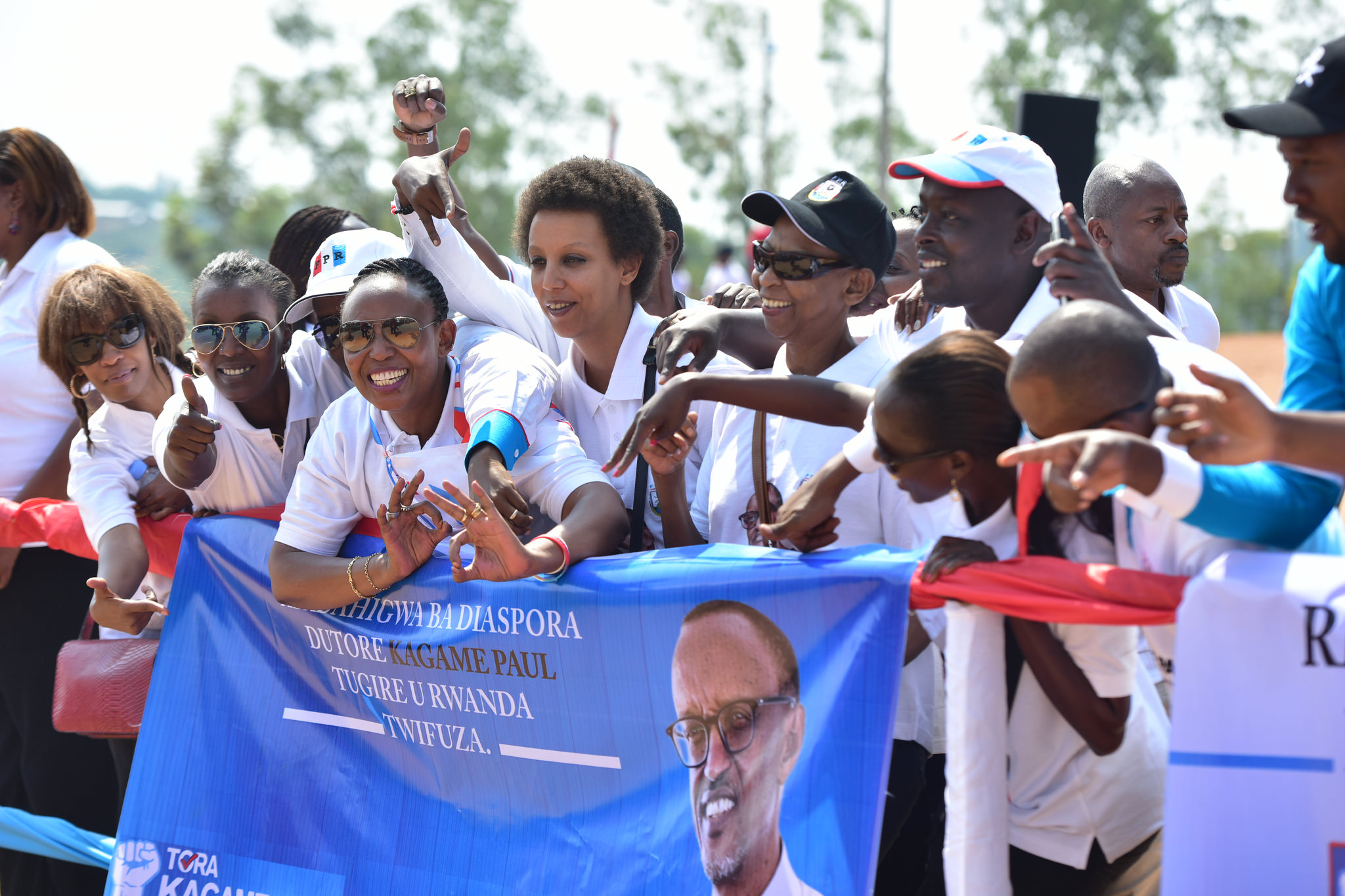 Not any different from the 2010 campaigns, RPF rallies attract unimaginable crowds. Estimates provided by party agents at all sites and posted on Twitter, show numbers reach more than 100,000 at every rally so far.

In some areas, the number has reached 200,000. It could be difficult to have exact figure, but all rallies spread as far as the eye can see. At some sites, RPF supporters are seen seated all over the hills.

Apart from the big turnout, RPF colours are seen all over the streets of the country. Some have even painted its colours in the middle of tarmac roads – to signify some of the road projects Kagame leadership brought to them.

At different sites, one can see the name RPF and Kagame written on top of the hills surrounding the sites. Apart from this, people flock around Kagame and the First Lady to pose for selfies.

Despite presidential security precautions, nearly all people have phones – earning this election: “the selfie election”.