President Paul Kagame led Rwandans in commemoration of the 1994 Genocide against Tutsi where and emphasised that remembering the victims will never stop.

Twenty four years have gone since Rwanda lost over one million Tutsi in the 1994 Genocide against Tutsi.

But for President Kagame, “It is like remembering just started,” he said on Saturday at Kigali Genocide memorial.

The President was accompanied by the First Lady Jeannette Kagame and they laid the wreath at the Kigali Genocide memorial where 250,000 victims are laid to rest.

Also to lay the wreath was the dean of diplomatic corps in Rwanda, South African High Commissioner to Rwanda George Nkosinati Twala.

After laying the wreath, the President proceeded to the next activity; lighting the flame of remembrance “Urumuri Rutazima” at Kigali Genocide Memorial at Gisozi.

To light the flame, he was handed over the torch by the youth, a sign of hopeful future of Rwanda. The flame will remain on for three months which corresponds to the period in which the Genocide happened.

President Kagame delivered the national address of the day at at the amphitheater that features a design of Rwanda’s traditional house.

President Kagame thanked Rwandans for their resilience and the courage they have expressed to move on and deal with the country’s history.

“I want to thank Rwandans for the choice they have made and the path we are on. We all understand the role we have to play to reverse our bad history and draw strength for our development,” the President told a silent audience at the memorial site.

While Genocide against Tutsi is still fresh in the minds of Rwandans, the President said that: “Remembering is about being aware of the truth of our history, that it is our history and that we must remain united. This will be the foundation of rebuilding Rwanda and moving forward.”

Rwanda was hit hard by the Genocide. But Kagame, who led Rwanda Patriotic Front (RPF) Inkotanyi that stopped the Genocide in July 1994, said that Rwandans should remain strong and move on to build a strong nation.

“We must keep rebuilding, increase our strength at every level; economically, security wise, and ensure our society is functioning well. This will help us to be resilient despite our bad history,” he said. 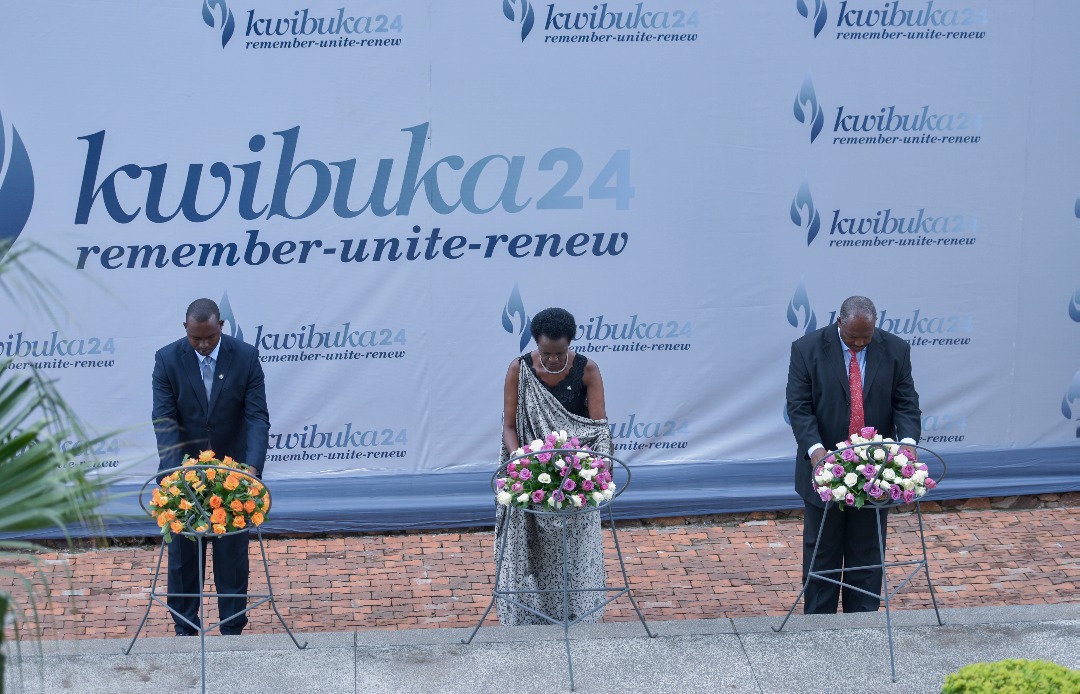 Rwanda still grapples with factions of countries and individuals who still deny the Genocide. But according to Kagame, “The truth never goes away. The truth can pass through fire untouched,” he said.

“It is a good thing to make the truth the foundation of our development,” he added.

At the event, Dr. Jean Damascene Bizimana – Executive Secretary of the National Commission against Genocide (CNLG), gave a detailed lecture on how the genocide was planned years back before the crash of the plane carrying former President Juvenal Habyarimana.

For instance, he shared different speeches delivered by the former President which signaled a cruel plan of the Genocide against Tutsi.

On November 19, 1982, Dr. Bizimana said, former President Juvenal Habyarimana shocked Rwandan students in Belgium when they asked him a question about Rwandan refugees in Uganda.

In response, Habyarimana said his government was advising all Rwandan refugees in different countries to acquire land and cultivate, find jobs since Rwanda was full and could not accommodate them.

With such a response, Dr. Bizimana said, “It was clear that Habyarimana government had planned Genocide earlier before he even died.”

Elsewhere in the country, Rwandans met at different village locations to commemorate the Genocide against Tutsi.