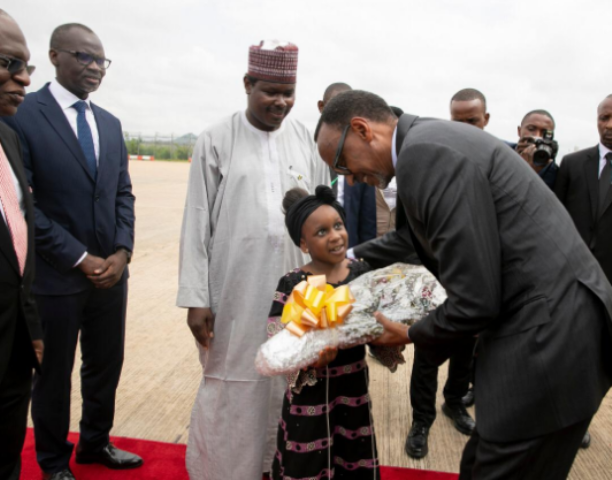 Rwanda’s President Paul Kagame is in Nigeria’s capital Abuja where he is expected to speak at the country’s National Democracy Day Anti-Corruption Summit.

At the invitation of his counterpart President Muhammadu Buhari, Kagame, who is in Nigeria for two days, will give insights on Rwanda’s war on corruption.

Corruption index reports by Transparency International puts Rwanda among the three less corrupted countries in Africa for the last 2 years.

The country was also the first in Africa to introduce the e-procurement system in 2016.

On the other hand, Nigeria stands on the 144th position of Transparency International’s 2018 corruption index.

The position, according to several reports, has been triggered by corrupt leaders – who emptied state coffers.

For instance, a report by United Nations Office on Drugs and Crimes (UNODC) indicate that between 1960 and 1999, corrupt leaders in Nigeria ran away with $400 billion and deposited it in foreign bank accounts.

On the second day of his visit, President Kagame will attend the official inauguration ceremony of President Buhari who was reelected in February of this year.

Held under the theme “Curbing Electoral Spending: A panacea to Public Corruption” the summit is organised by the Nigerian Economic and Financial Crimes Commission (EFCC) in collaboration with the Presidential Inauguration Planning Committee.

In 2018, President Buhari championed the African Union theme “Winning the Fight against Corruption: A Sustainable Path to Africa’s Transformation”.

He has also made anti- corruption one of his campaign themes in 2019 and vowed that the fight against corruption and Illicit Financial Flows will remain a top priority.

Yesterday, the Nigerian government said it will publish the findings of its ongoing survey on corruption in September.

The survey is the second National Household Survey on Quality and Integrity of Public Services in Nigeria this year.