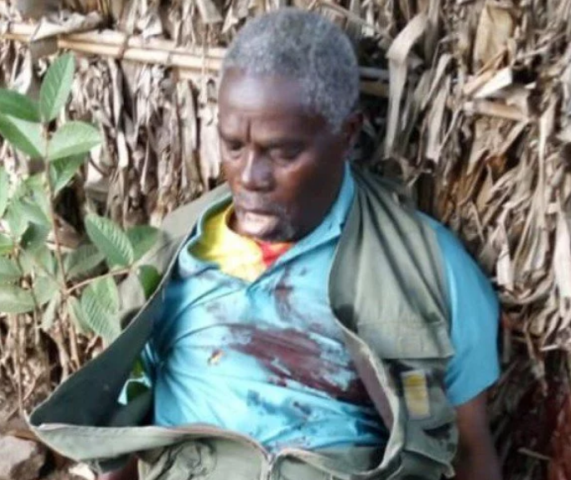 The top commander of the Democratic Forces for the Liberation of Rwanda (FDLR) has been killed by the Congolese army in an operation, the Spokesperson of the Armed Forces of the Democratic Republic of the Congo (FARDC) in North Kivu confirmed to KT Press on Wednesday.

Maj. Ndjike Kaiko said that Gen. Sylvestre Mudacumura was killed in operation in Rutshuru area of North Kivu, which was aimed at routing armed groups that operate in the region and responsible of destabilising the Eastern part of DR Congo.

Mudacumura has been the commander of the rebel group mainly made of the remnants of the former Rwandan government forces and Interahamwe militia accused of committing atrocities in the 1994 Genocide against the Tutsi.

“It is true he was killed in the fighting,” the army Spokesperson in North Kivu, confirmed the killing of Mudacumura, who was wanted by the International Criminal Court (ICC) for committing war crimes and crimes against humanity.

“The 34th military region of North Kivu confirms the death of Sylvestre Mudacumura, the leader of the FDLR, killed with his closest lieutenants by the FARDC in the night of Tuesday to Wednesday in the chiefdom of Bwito, territory of Rutshuru,”

“The neutralization of Sylvestre Mudacumura is good news for the Congolese army because he was the head of the radical wing of the FDLR who opposed voluntary repatriation to Rwanda and his neutralization is a strong signal to the other rebels,” the Kasonga said on Twitter.

In 2012, ICC issued arrests warrants for Mudacumura on nine counts of war crimes and crimes against humanity in Eastern DRC where the rebel group has been based since 1994. He was reportedly to be fiercely against voluntary repatriation and peace, leading a faction that opposed efforts to end hostilities.

Born in 1954 in Gisenyi, Western Province, Mudacumura was the overall commander of the military wing of FDLR, previously known as the Forces Combattants Abacunguzi (FOCA).

He was the deputy commander of the Presidential Guard of the Rwandan Armed Forces (FAR) and together with Ignace Murwanashyaka oversaw the operations of FDLR, with the latter focusing on political activities while the former led military activities.

Following the issuing of arrest warrants, the U.S Government, in 2013, put a $5m reward to whoever would lead to the arrest of Mudacumura to face charges for the numerous war crimes for, among other acts, rape, murder, and mutilation.

“To bring Mudacumura to justice, the United States Government is offering a reward to individuals who furnish information leading to his arrest, transfer or conviction for war crimes.”

It was reported that Mudacumura had moved his wife and children to Germany with the help of Murwanashyaka and committed to remaining inside DRC where he plotted attacks and vowed to fight the government of Rwanda till death.

Following the split of FDLR, with one group opting to voluntarily repatriate, Mudacumura and at least 120 men went deep into the forests of Eastern DRC, pitching camp in Makomalehe, also known as Camp Paris or ‘Monument’, in North Kivu.

According to sources, the operation by FARDC was supported by Nduma Defence of Congo (NDC), which is cooperating with government forces to uproot rebel groups in North Kivu.

Reliable Sources say Mudacumura, 65, was battling diabetes at the time of his death, and strictly moved on foot with tight security to avoid arrest.

The Minister of State for Foreign Affairs in charge of East African Community (EAC) Olivier Nduhungirehe told KT Press that the death of Mudacumura is good for peace and security in the region and a sign of commitment by the government of DRC to fight negative groups.

“Good news for peace and security of DRC and the region. This is also a confirmation of the commitment of the new Congolese leadership in neutralizing negative forces in eastern DRC,” Nduhungirehe said.

Inanga is My Redeemer and Office, Says Deo Munyakazi