Featured: On StarTimes Friday, Germany vs. Netherlands – A Rivalry Continued 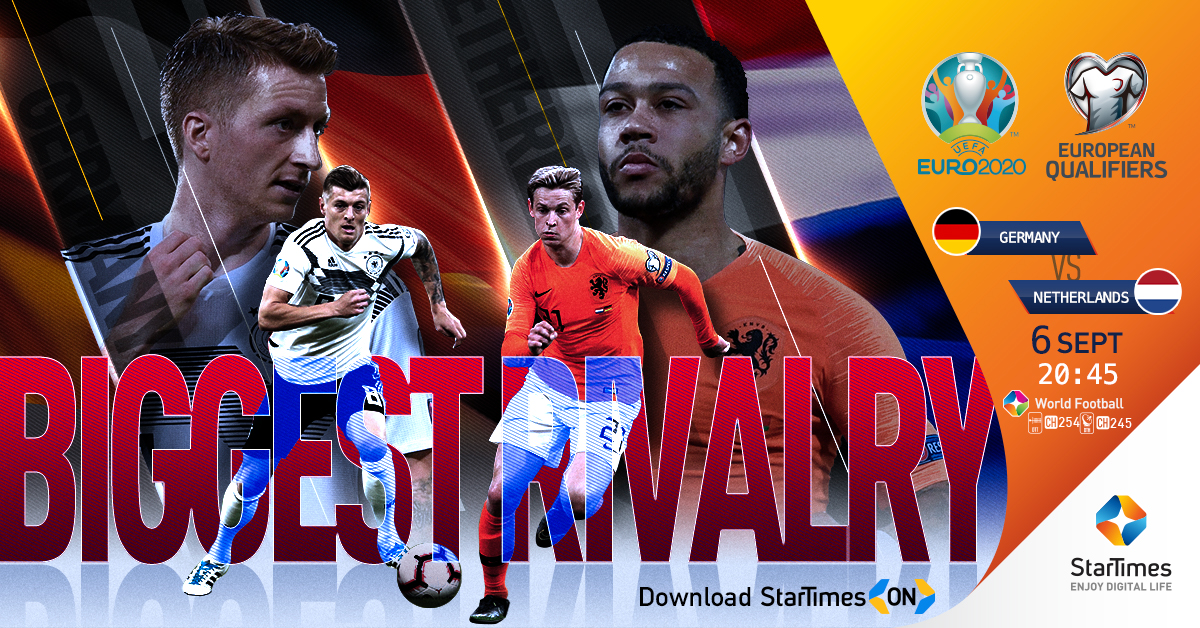 There are few rivalries in international football that are as fiercely contested as the one between Germany and the Netherlands.

So when the two take to the field in a Euro 2020 qualifier in Hamburg on Friday, it is irrelevant that the two former super-powers of world football have seen their fortunes wane recently.

Germany are ranked a lowly 15th globally, whilst the Dutch, who were once considered the second-best team in the world are one place behind their rivals.

With Belarus, Estonia and Northern Ireland the other teams in Group C, Die Mannschaft and Oranje are expected to occupy the top two places which would see them through to the finals.

But Northern Ireland currently sit in top place, having won four out of four – albeit against Belarus and Estonia. Germany, with three wins from three is behind them, followed by the Dutch, who have one win from two games.

Germany snatch a dramatic last-gasp 3-2 victory in the Johan Cruyff Arena in Amsterdam in March to pile the pressure on Ronald Koeman’s side, who cannot afford to drop another three points.

On Friday they will face a Germany side eager to put recent disappointments behind them. They were knocked out of the World Cup in the group stage and finished bottom in their European Nations League group and were relegated.

That notwithstanding, the German squad has a certain familiarity to it, with captain Manuel Neuer, Toni Kroos, Marco Reus, Joshua Kimmich all being called-up.

However, veterans Mats Hummels, Jérôme Boateng and Thomas Müller, who were controversially axed after the World Cup, remain ousted, while Leroy Sané and Julian Draxler are injured.

Coach Joachim Löw has introduced two uncapped played in defender Niklas Stark and forward Luca Waldschmidt, who topped the scorer charts at the Euro U-21 championships earlier this year.

But with Leipzig’s Timo Werner being the in-form Bundesliga striker at the moment – having scored a hattrick against Borussia Moenchengladbach on the weekend – and Serge Gnabry having an astonishing scoring ratio (seven goals in eight matches) for the national team, it seems likely that Löw will start with them upfront.

The coach said he was looking forward to the games against the Dutch and the qualifier against the table-topping Irish three days later in Belfast. “I am eagerly waiting to return to the team and the players.

“In every position the players know they need to improve. We are fully aware what it will take to be amongst the best at the Euros next year,” he said.

Despite their ranking, the Dutch, on the other hand, made it to the inaugural finals of the Nations League and were only defeated by the hosts Portugal in the championship match.

Like his counterpart Koeman has opted for experience, with newly crowned European Footballer of the Year Virgil van Dijk leading the side into battle alongside players like Georginio Wijnaldum, Kevin Strootman, Ryan Babel and Memphis Depay.

Football fans throughout Africa will be able to see this great rivalry play-out in Hamburg live on the StarTimes World Football channel, as the continent’s leading digital-TV operator has secured the broadcasting rights to the prestigious competition.