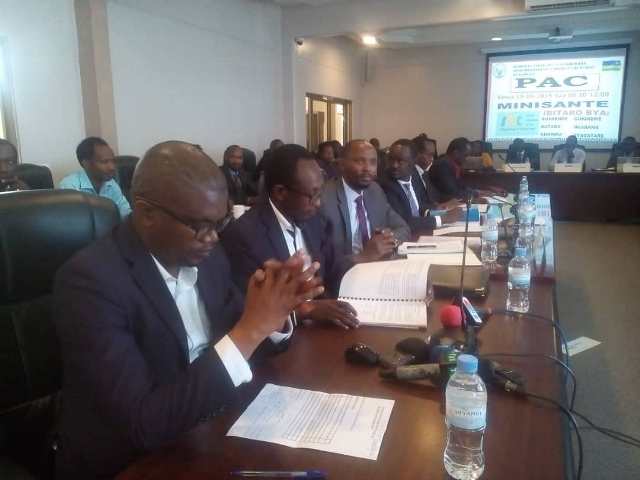 Rwanda parliament has given one more chance to hospital directors and district officials to clean up the mess in management of health facilities, warning they risk not surviving next year’s compliance audit.

This warning comes after the line ministry of Health and Rwanda Biomedical Center (RBC) appeared before the Public Accounts Committee (PAC) yesterday, showing a trait of gross mismanagement of health contracts, procurement of equipment and faulting the staff recruiting procedure among other issues that were raised by the office of the auditor general’s report 2017/18.

This persistent low performance made the Health ministry and RBC get an adverse comment (extreme managerial errors) and low compliance of 53% to the Office of the Auditor General’s recommendations instead of the required 60% mark.

According to parliament reports, this lack of compliance trickles down to district levels where take up of full ownership of administrative actions is still lacking especially in equipment maintenance.

This has led to a number of costly fixed assets such as vital medical equipment lying idle for four years now.

Some of the equipment includes; patient monitors, medical scales, phototherapy machines, distillers and bain Marie equipment (used for heating); microscopes, among others that were stolen with no trace and neonatal incubators which were switched off at Ngarama hospital in Gatsibo district, Eastern Province, because of making squicking noises when turned on.

“This is your last chance. This time we are just warming you up for the next hearing where you will not give any excuse and will be grilled with deeper questions on these issues, ” said PAC chairman Jean Chrysostome Ngabitsinze.

Both the PAC and OAG said that there is no coordination between districts and hospital managers which makes the health services derail thus cause my citizens denied access to healthcare.

For instance, Kinihira hospital was accused of lack of taking responsibility and total negligence in their activities, while Gihundwe hospital was blamed for having fund mismanagement with many unpaid debts and yet went ahead to pay extra money in its operations such as Rwf13 million that was paid as an extra charge.

Ngarama hospital had issues of bookkeeping in which receipts worth Rwf11 million were kept in places where they don’t need to be-mixing recipients for Rwanda Social Security Board (RSSB) of which MPs said that this does not need ACCA qualification to manage a debit book.

“How can an accountant not be able to have a recipient of payment in the right place, with no invoice and with no supporting documents,” asked MP Christine Bakundufite.

To make matters worse, some districts were involved in making a list of tenders which were offered to one person and other published yet were not on the official procurement list.

Antoine Kayira, the Rwanda Public Procurement Authority (RPPA) official who attended the hearing also warned districts on procurement malpractices but said that there is no single excuse to tender unlisted bids which comes with unfair practices in the whole system.

PAC members said that these issues will be revisited in the next hearing next year.

While the hospital and district heads managed to survive PAC wrath, the ministry of health and RBC didn’t skip the hard hit from lawmakers.

For instance, PAC members screened the audit report for 2017/18 and found that RBC did negotiations of a contract outside the guidelines.

PAC said that RBC held talks with a bank after a contractor, SLP Ltd, failed to deliver delaying one of the hospital projects for more than a year.

RPPA regulation provides that there cannot be any argument provided by a financial entity bank when it emerges that entity for which they provided a performance security guarantee, cannot perform.

This, according to PAC, was a stinger for deep investigation into the matter and call for action.

“You went to talk to the bank on behalf of a failed contract execution and we have very high doubts in the motive behind this,” Ngabitsinze said.

PAC chairman stated where they had seen a mistake, saying it has now turned into a criminal case, because of evidence of consent in committing a crime and the next steps will be taken with this information.

Though RBC officials tried to explain that the negotiations were because of the contractor disappearing in thin air – leaving many workers complaining of unpaid work done, both the OAG and parliament said that there was intentional negligence in monitoring the project and thus paving way for abuse of citizens’ rights to a decent living for their sweat.