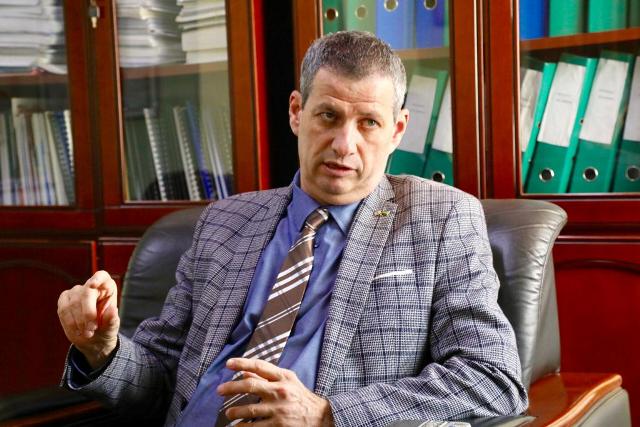 Amid reports of financial mismanagement and failure to account for public funds in the ongoing Public Accounts Committee (PAC) hearings in Parliament, the CEO of the energy holding company – Rwanda Energy Group (REG), Ron Weiss says the power company has since improved efficiency but admits there are still several issues to deal with.

REG, which was incorporated in 2014 as a consolidated business entity to improve efficiency, increase access to electricity for all and to draw in investment in the energy sector, is one of the government institutions that were summoned by PAC to explain why they failed to account for public funds as indicated by the Auditor General.

The CEO of REG, Ron Weiss, has spoken out, revealing that the energy utility has since improved greatly in terms of efficiency, accountability and service delivery, over the last three years, in a bid to clear the air on the goings-on in the corporate entity.

The Israeli engineer and seasoned energy expert with a 27-year experience told KT Press that REG as an institution has moved to take concrete action on the challenges that dogged the institution for almost two years and a half he has been at the helm.

Among other things, Weiss said that REG has since increased service delivery, the number of connections per year and sealed loopholes in accountability which led to the utility running in trouble with the Auditor General.

“We are trying to do our best to serve the country. We have a very good team. People are committed and they have the knowledge. We are working together in order to see how we can improve services compared to the past,”

He added that REG has been able to eliminate breakouts completely and is working towards stopping power cuts which have also reduced tremendously.

Weiss, who was sourced from Israel to help seal shortages in the energy sector, said in the exclusive interview that in terms of operations and development, REG has been able to build new substations, new transmission lines and new generation facilities which have boosted access to electricity.

“We have signed all the contracts for a generation. Rusizi III was signed, together with Symbion, 56MW was signed and Nyabarongo II was also signed. All the projects are under construction or in planning but everything is on track,” he said, adding that apart from budgetary constraints, the utility is delivering on expectations.

According to Weiss, when he arrived in Rwanda in May 2017, energy production countrywide was at 37 per cent and today it is at 51 per cent, with the government plan of hitting 100 per cent access to electricity by 2024 still very much on track.

“We are getting support from the Ministry of Infrastructure. The government is helping us to find solutions and more resources and once we find resources, we will be able to achieve even more,” Weiss explained.

The REG CEO says that despite the ongoing PAC hearings portraying the energy company as one of the mismanaged institutions, the past couple of years have seen great improvement not only in service delivery but also in how it communicates.

In terms of demand and supply, Weiss says that currently, REG has no issues of shortages in supply because the installed capacity is currently at 224MW yet the highest demand at the peak is 150MW.

Though the generated power fluctuates depending on the season, Weiss says Rwanda currently doesn’t have surplus electricity but it has enough electricity to sustain the country.

“We have enough electricity. We don’t have even one day when we have to disconnect customers to supply others. From June 2020 when the Peat to Power is connected to the grid, we will have more than enough. I think at this point we will be an able event to export some power,” he said.

The REG head says that in terms of generation, the country is not short of investors, with a number of projects already in the pipeline but more investors are needed in the network, transmission and distribution sector which delivers electricity to the end-user.

“We are looking at different options mainly development partners or the government through the budget but also investors. I think we have brought REG to a position where we can even go to the Private Sector and tell them you can put your money here and it pays back,”

“Soon we will go to the stock exchange and join the private sector. It will take us three years or so but this is the direction we are going,” Weiss said, adding that REG is headed towards profitability.

In terms of accountability, the REG CEO responded to concerns of the utility failing to deliver a clean audit to the Auditor General, admitting that the current entity carried over audit problems from what used the be the Energy, Water and Sanitation Agency (EWSA), which the current management has addressed.

“Yes, we still have issues that we need to solve. We are carrying a lot of issues from EWSA time and we are working very hard as a team to clean our books. One of the major issues was that projects were done without a proper recording and without all the supporting documents,”

“Now we have all the documents. We have succeeded in locating all the documents from the archives and from all departments and we prepared all the files. Today, for each project we have a clean file with all the payments, with all the investment that was done and the money that came from development partners,” he said.

Weiss says that even though the opinion is the end is still ‘not a clean audit’, REG improved a lot –from 160 queries in the previous audit and currently 78 queries, meaning that the group was able to clear half of the queries. He said REG is driving towards eliminating the queries.

“We are hopeful that we are going in the right direction. We have already got five clean audits for projects from the Auditor General. He is auditing the whole company but also projects. There are five projects that got clean audits which were not the case before,”

“With time, our financial side will be in order. If not this audit, the next audit will find us 100 per cent clean audit,” Weiss said, attributing past audit issues to poor documentation and record-keeping, not embezzlement or misuse of funds.

In terms of reining in corruption, Weiss said REG currently enforcing a zero-tolerance approach to corruption which is aimed at completely eliminating graft-related practices in the entity.

In 2014, the government embarked on reforms in the energy and water sector which saw energy separated from water operations. REG was formed as a consolidated business entity with two companies created –Energy Development Corporation Limited (EDCL) and Energy Utility Corporation Limited (EUCL).