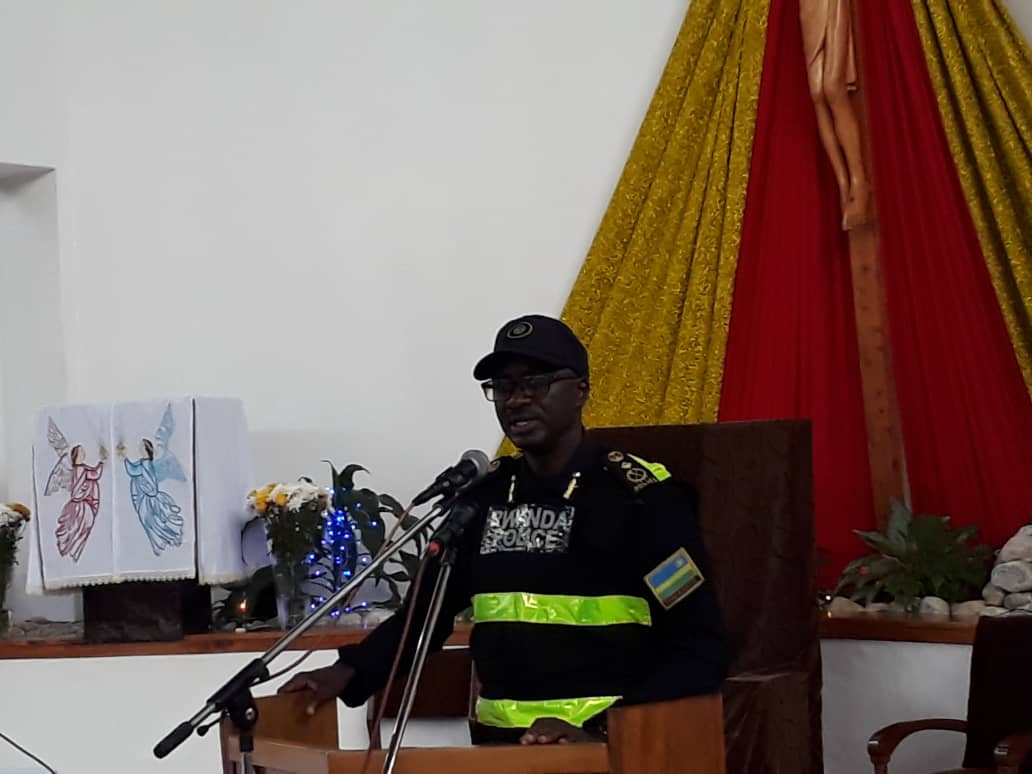 This Sunday, the Catholic Church Christians had preachers, not like the usual ones. At convenient times, they Christians flocked to their respective churches, with their rosaries of all colors, some clothed in traditional attires –kitenge- that have the illustration of Virgin Mary, Jesus, angels and Saints.

In several churches across the country, men and women in uniform – policemen – entered with the Christians, but took front seats, a sign that they were on invitation and had a message to pass.

Indeed, at convenient time, the officers, most of them seniors, were introduced, and given the floor, to explain an ongoing campaign –Gerayo amahoro- 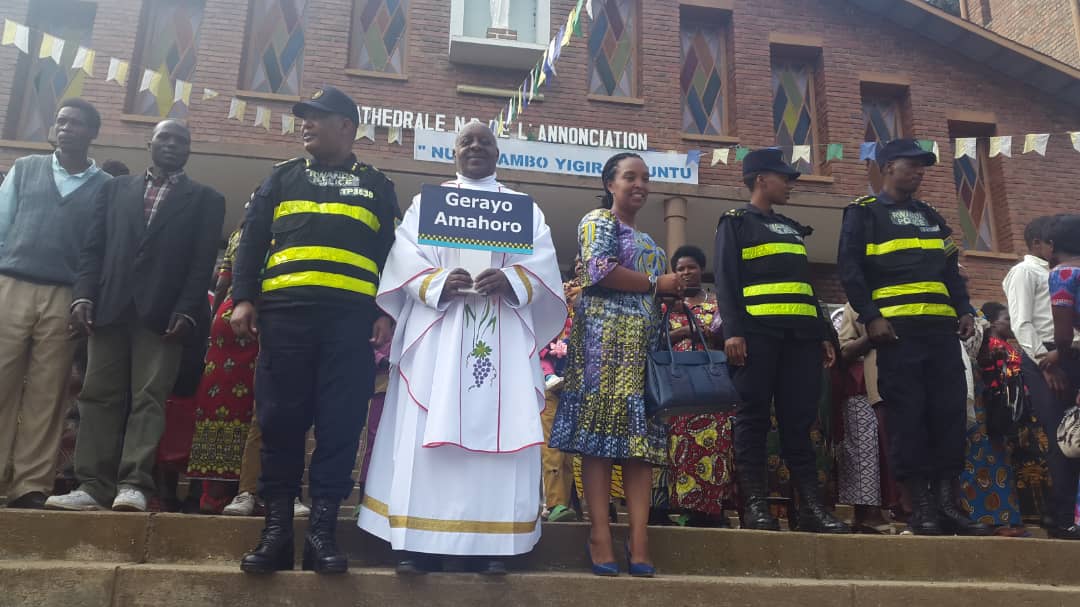 It is a yearlong campaign that intends to sensitize the general public to mind the road safety, which is a concern that cannot be solved by the only traffic police and drivers, but every road user.

“This program does not impede our teaching of the Word of God at all. For sure, Christians need to know how to prevent accidents from affecting their lives,” introduced Father Celce Hakuziyaremye at Kabgayi cathedral.

With these words, Superintendent of Police (SP) Bahire Anastase, the police commander in Muhanga district took the floor and explained from A to Z what Gerayo Amahoro is all about and the behavior every road user should adopt to avoid being an agent or victims of accident.

It was fruitful. Even the priest said he needed that literacy. 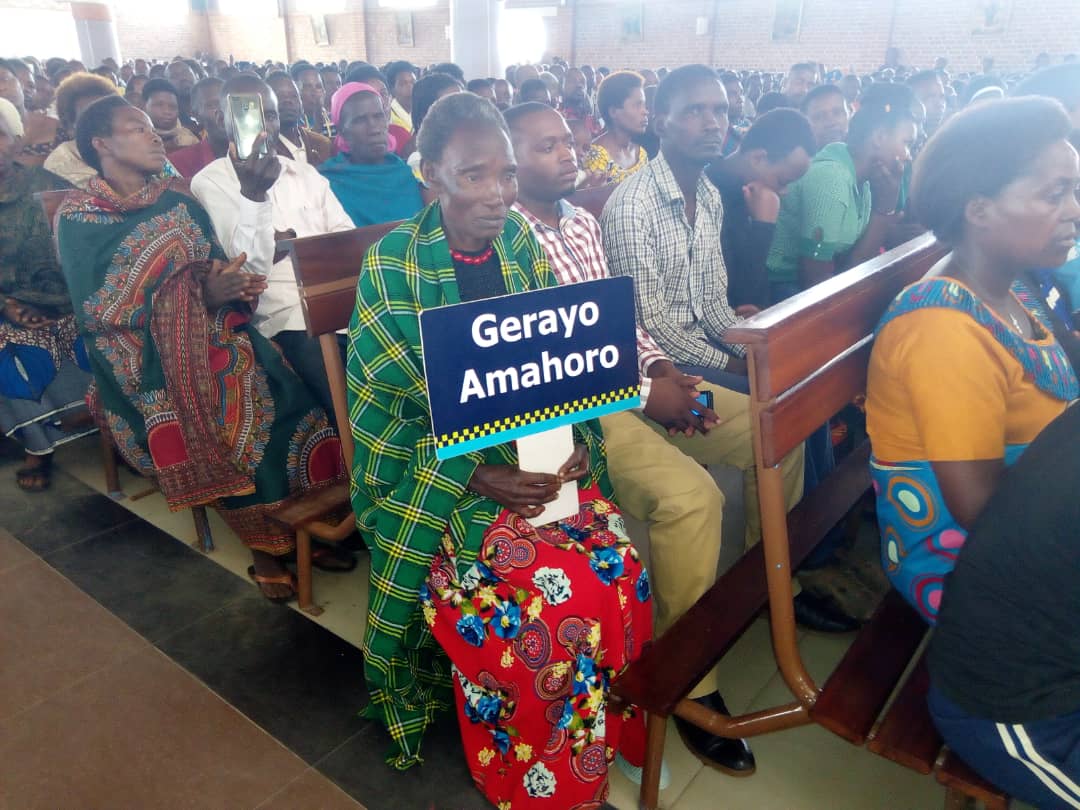 “Sincerely speaking, I also learnt a lot in road safety today. I did not know that every pedestrian should use the walkway on the left of the road boundery where they face the cars,” Hakuziyaremye said.

For the 65 year old Clemence Nyirabagenzi who had attended the first service at Kabgayi church, the message captured something very important aspect in road safery.

She said, “for the first time, I learnt the notion of priority. In this city, I had always thought that the principle of survival of the fittest applies. Crossing the zebra walkway is a challenge here because people mix with cars and when you are not smart enough, they can knock you.” 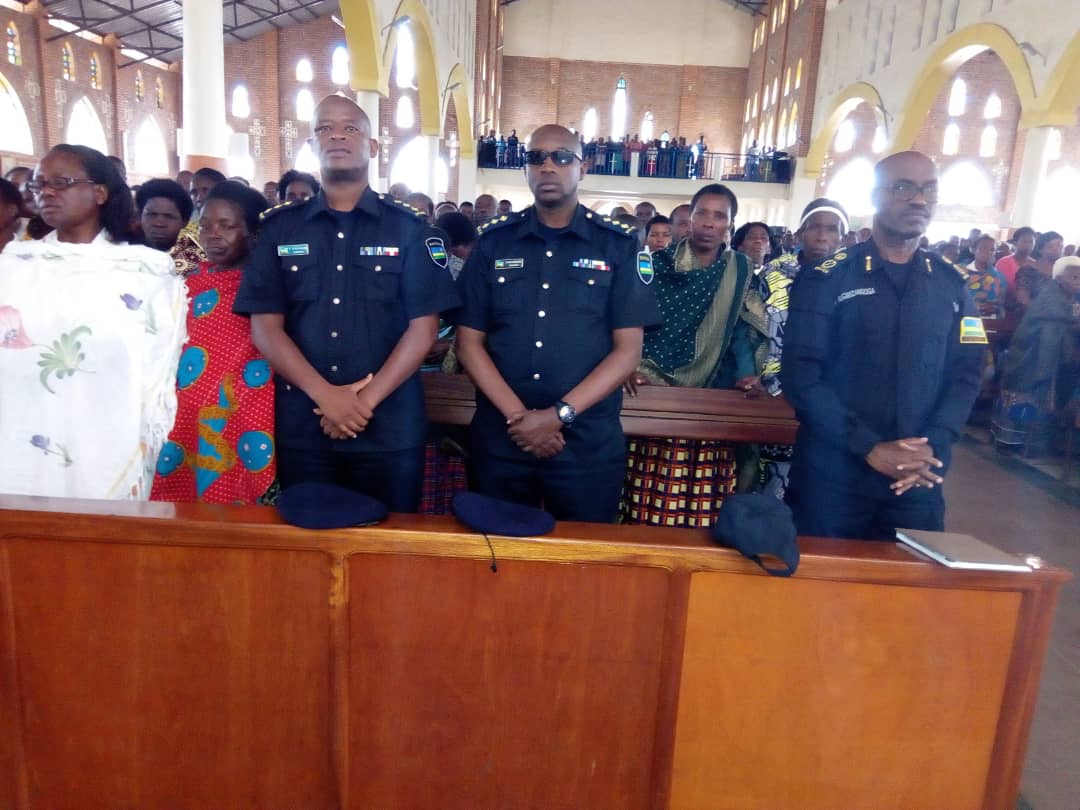 She now understands that there is time for pedestrians to cross, time to also allow cars to pass.

In Ruhengeri Cathedral, ACP Reverien Rugwizangoga also did not go astray. He emphasized, among others, that a driver should never use their mobile phone while behind the wheel.

To make the message stronger, police had earlier on sought church endorsement. Thus, the written communiqué that was read about road safety-gerayo amahoro was signed by Bishop Servelien Nzakamwita, the bishop of Byumba who is the current overseer of Ruhengeri diocese. 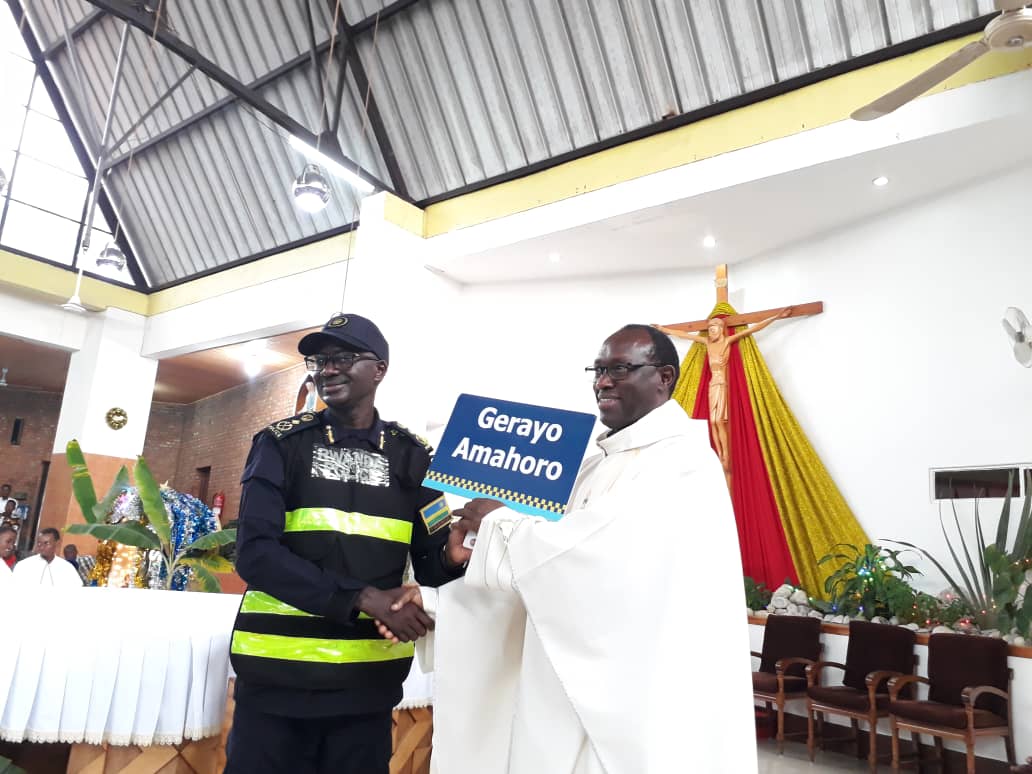 “We always heard this campaign on radio, but when we saw a police officer on the alter, we understood that there is no joke, that we have to wake up and listen and adjust accordingly,” said Denys Kanyabuzige, a Christian. 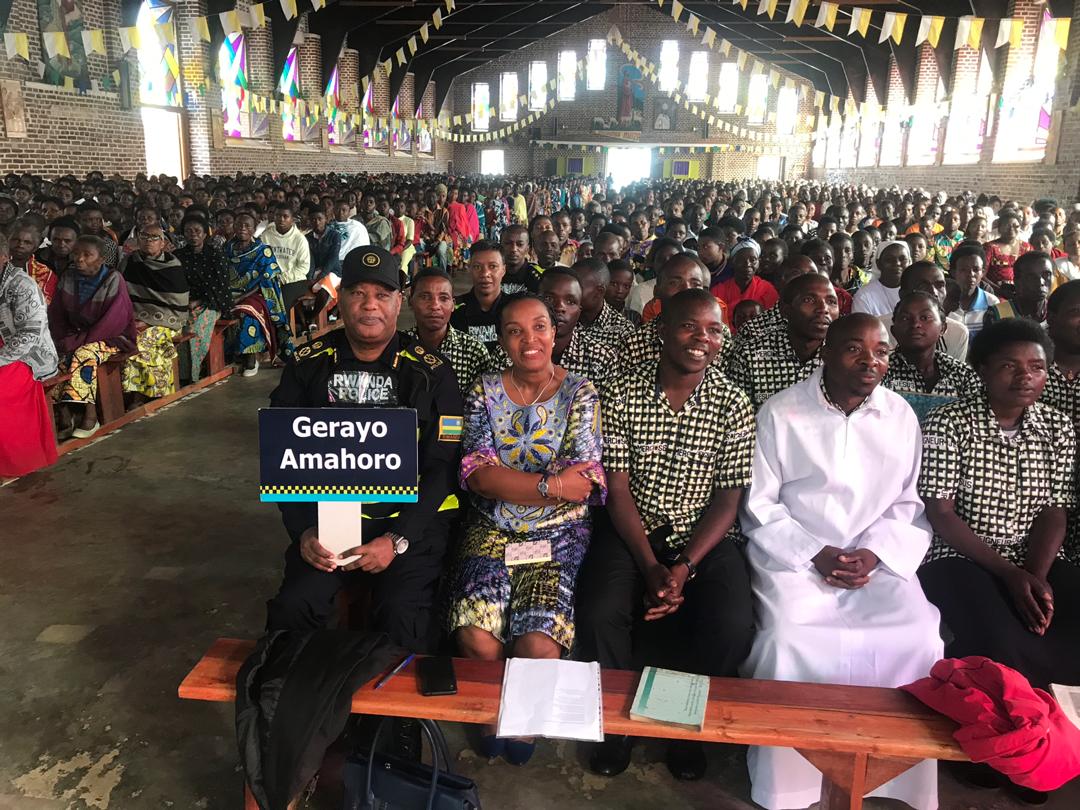 “We shall never relent from teaching road safety in our assemblies, not until the last person will have understood, “said Father Nsengumuremyi reminding that road safety is a matter of everyone, Christians inclusive. 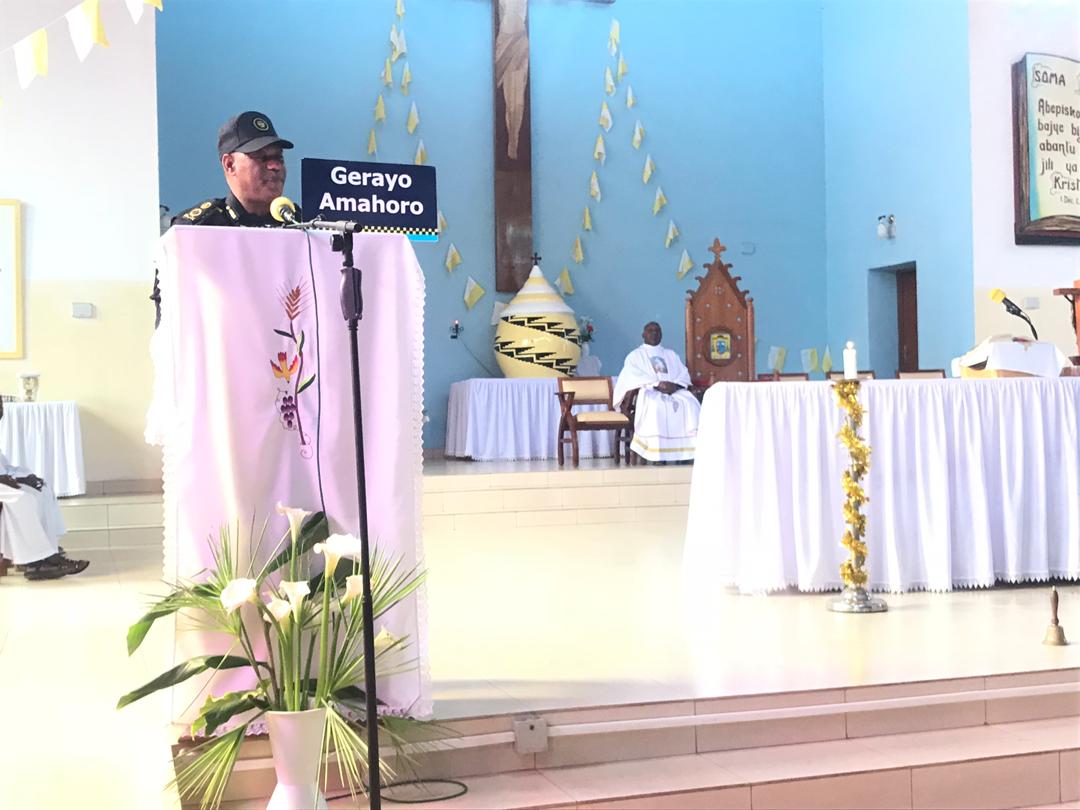 At the cathedral, the Preacher of the day, Father Consolateur Innocent told police spokesperson CP John Bosco Kabera, that police is blessed to be a partner of the church.

Meet the priest also in the traffic police jacket.

“This campaign –gerayo amahoro-is an act of love. We normally don’t allow anyone to stand on this altar. We allowed it to happen because we agree that you are here for a serious cause. Go in peace,” the priest said while sending off the mass. 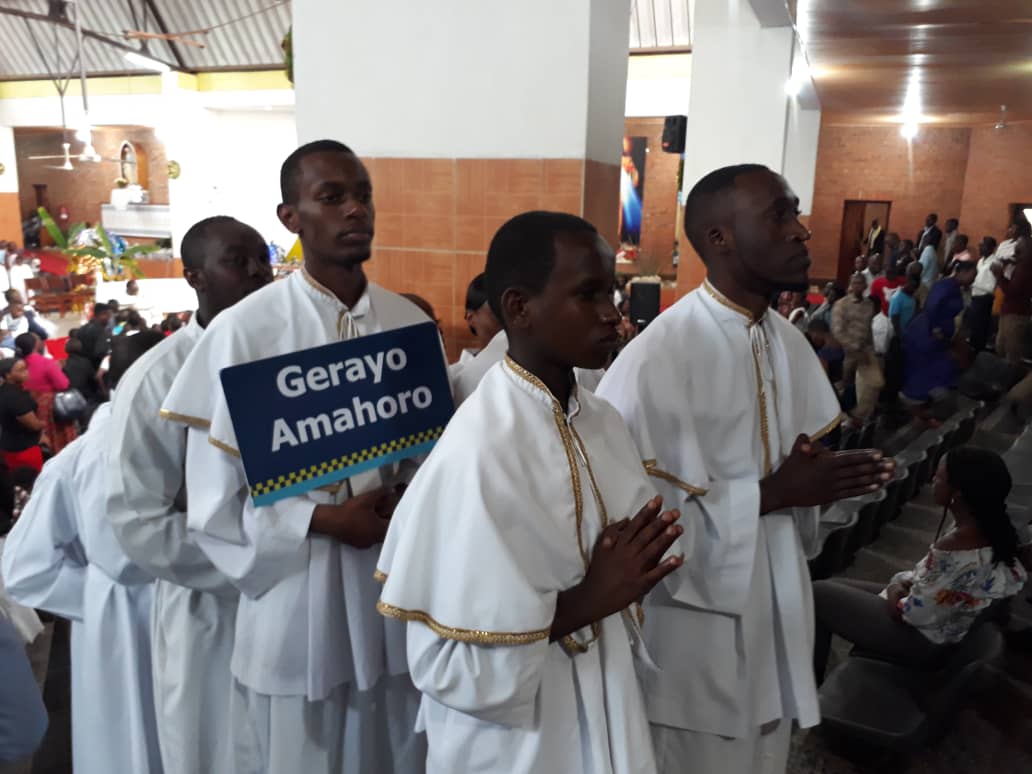 Kabera agrees with that. Earlier on, he told the Christians at Saint Michel cathedral, that police and the church have the same understanding of peace, tolerance, unity and reconciliation.

The Gerayo amahoro campaign targets huge public gatherings as a way of spreading the message effectively. Previously, police reached out to drivers in several taxi parks of the country, students, moto taxi riders, to mention but a few.

The campaign is on its 35th week out of 52 weeks that it is supposed to cover.

This week was dedicated to the Catholic Church, but other churches will be reached out, too.