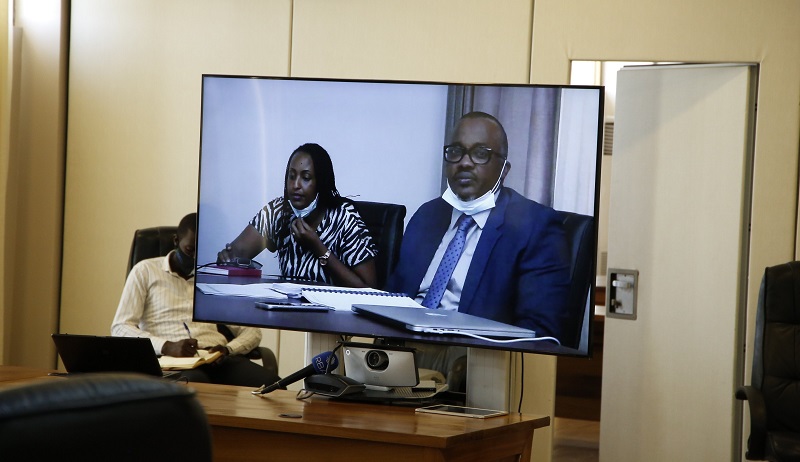 The Public Accounts Committee (PAC) today ordered the officials of Rwanda’s Business Development Fund (BDF) to go back and prepare their explanation on the Rwf2.8billion that was paid to separate individuals without supporting documents.

The decision was taken by the committee during a public hearing this Thursday in which the institution was meant to explain how it spends billions of unaccounted for government funds in the fiscal year 2018/19 budget.

In the Auditor General (AG) report parliament heard that since 2012, BDF had recorded over Rwf4.7billion in unaccounted funds.

The AG, Obadiah Biraro said “out of this money, 20 percent was injected in investments with no returns, and about rwf600million- close to 25 percent was lost in the process,” Biraro said.

MPs were also concerned that BDF didn’t implement its initial objectives of financing small business but big ones.

The above credit guarantee to finance 217 projects of large enterprises as opposed to the original policy of SMEs, the AG said in a report.

This implies that a high portion of credit guarantee was provided to secure finance of 2% (217 of 10,191 projects) of total projects secured in this period.

“This does not facilitate as many deserving beneficiaries to access finance as should have been. Providing credit guarantees to large enterprises deviates BDF mandate,” the AG said.

The report also showed that 13 claims for loss compensation were submitted to BDF by large enterprises and this accounts for Rwf1.6billion which represents 54% of the total claims approved by BDF.

Biraro said this weakens the strategic objective of guaranteeing SMEs to access financing for the bonafide projects and also weakens the overall objective of poverty reduction and job creation amongst small entrepreneurs.

MPs like Christine Bakundufite were intrigued over these findings and asked why.

The BDF boss, Innocent Bulindi said that some of the money was loaned and guaranteed to applicants who ended up making losses and the institution had to cover the remaining losses.

BDF attributed the financial errors to the policy that governs the business funding program but MPs said that this should have been mentioned earlier and changed by policy makers so that it benefits citizens.

“I withdraw this claim, please have my apologies,” Bulindi said in response and went on to explain that they have been monitoring funded project portfolios as provided in the policy.

The parliament also learnt that BDF didn’t put into consideration regulations of guarantying project funding without assessment of the risks involved.

For example BDF committed guarantees worth Rwf813, 860,394 to 11 enterprises without appropriately assessing projects viability and did not consider key projects aspects and risks such as availability of market, certification of the project, sufficiency of working capital and availability of infrastructure like electricity to enhance envisaged production.

Also, the AG showed that commercial banks highlighted financial risks of two projects as the clients were not compliant with loan repayment terms.

However, BDF did not consider such risk and committed guarantees amounting to Rwf415.6million but both projects failed and BDF had compensated Rwf45, 2million by the time of the audit in March 2020.

After hours of listening to different explanations, Parliament was not convinced and tended to think that BDF was not prepared enough to respond to the financial queries.

“We had stopped the hearing on basis of one reason. After one and half hours of discussions and listening, we realized that they (BDF) were not prepared enough thus giving them more time to properly read the report,” said MP Valens Muhakwa, the PAC Chairman.

In resolve, Parliament decided that BDF returns to the hearing on October 7, with proper explanations to financial concerns in the AG’s report of 2018/19.

No Bail for Rusesabagina