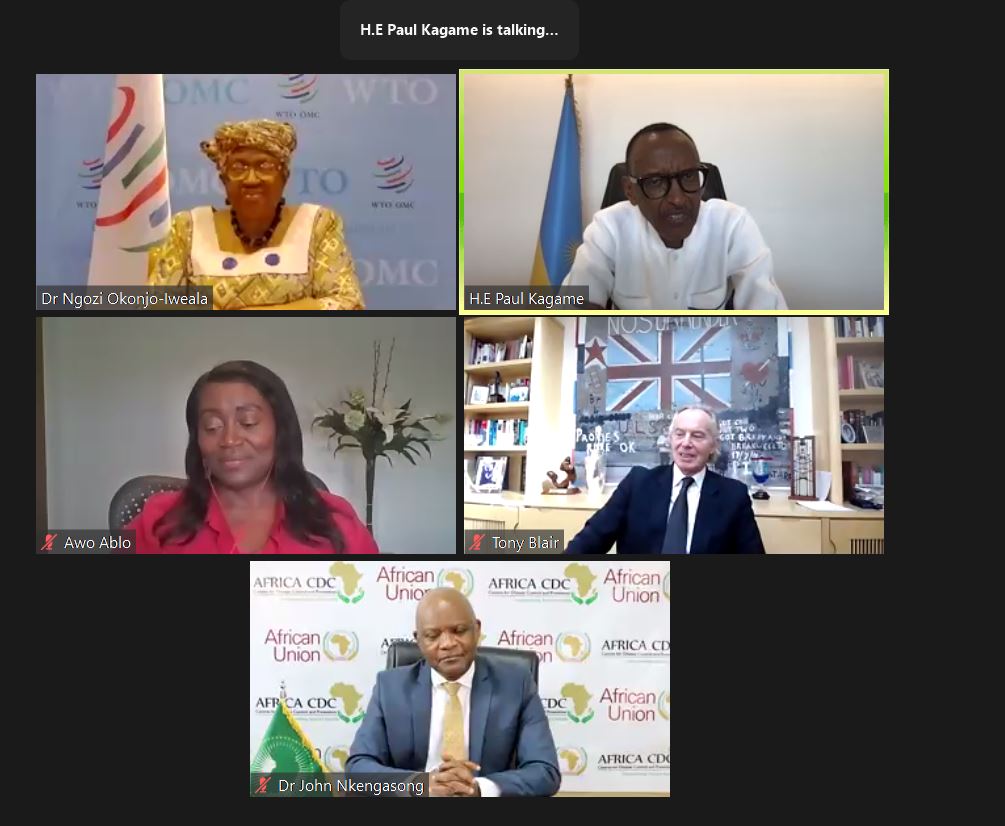 President Kagame speaking during the Tony Blair InstitutePresident Paul Kagame says Africa manufacturing her own medical supplies would minimise over dependency on external help, in the wake of the global vaccine inequalities, which have put the continent at the backfoot of the distribution chain.

The Head of State made the observation on Thursday while participating in a panel discussion organised by the Tony Blair Institute for Global Change on the impact of the New Coronavirus on Africa, one year after the outbreak, and what the continent needs to do to address shortfalls.

The panel had the former U.K Prime Minister Tony Blair, who is also the chairman of Tony Blair Institute for Global Change, Dr John Nkengasong, the Director of Africa Centres for Disease Control and Prevention (Africa CDC) and the Director General of World Trade Organisation (WTO), Dr Ngozi Okonjo-Iweala

It was moderated by Awo Ablo, the Executive Director for External Relations at the Tony Blair Institute for Global Change

President Kagame said that the COVID-19 pandemic magnified some institutional weaknesses across Africa. But it also uncovered some hidden strengths, which the continent can build on.

“One of the big gaps is that Africa does not produce significant quantities of medical supplies,” President Kagame said, adding the continent has had to rely on external support for COVID-19 tests, therapeutics, PPEs and now vaccines.

“The real solution is to prioritise manufacturing in Africa. The new Continental Free Trade Area for Africa, makes this even more attractive for investors,” he added.

President Kagame pointed out that one of the hidden strengths that has made a big difference over the past year is the effectiveness of Africa’s continental institutions such as the Africa CDC, which played a major role in coordinating supply deliveries for every country.

He also commended the African Union’s special envoys, including Dr. Ngozi Okonjo, who successfully pushed for a debt service suspension for Africa, which has given countries breathing space while battling the pandemic.

“There is no doubt that the pandemic has set the whole world back in terms of development progress, including Rwanda, inevitably,”

“But the fundamentals that were driving Africa’s strong growth before the pandemic, such as urbanisation, digitisation, tourism are just as relevant today as they were before,” President Kagame said.

President Kagame said that the continent cannot afford to go back to doing business as usual post the pandemic.

“If we don’t use this opportunity to really strengthen our health and education systems, it would be a big loss,” he said, emphasizing the importance of domestic health spending.

“I think every one of us should be considering health spending from our resources as probably the number one priority because if we get that right, then it enables us to deal with other priorities.

President Kagame highlighted what Rwanda is doing within its limitations to recover from the effects of the pandemic, including setting up an economic recovery fund to help businesses recover.

A paper released by the Tony Blair Institute titled ‘Vaccine Manufacturing in Africa: What It Takes and Why It Matters’ indicates that the African continent, with its more 1 billion population, faces an uphill task to catch up with the rest of the world in the global vaccine rollout.

The institute says that lack of manufacturing capacity means Africa can produce less than 1 per cent of its vaccine needs, with the situation set to become even more acute in the future as populations grow.

The issue is compounded by fragile health systems which often make the continent prone to disease outbreaks and pandemics.

“With Covid-19, lacking the capacity to manufacture its own vaccines has left the continent dependent on external suppliers and, as a result, disproportionately affected by vaccine nationalism, stockpiling and disturbances to international supply chains,” the former British PM wrote in the foreword.

“In turn, these have affected African governments’ ability to implement their rollouts, protect their populations and ultimately re-join the global economy,” Blair said.