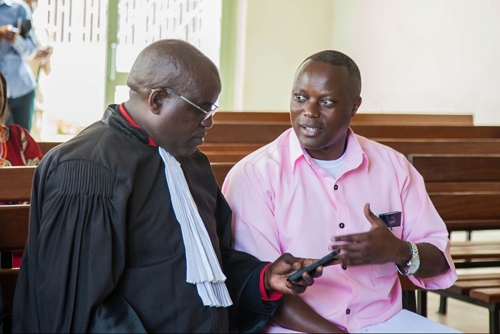 Jean Claude Iyamuremye(Right) and his lawyer

Jean Claude Iyamuremye who was extradited from the Netherlands in 2016 has been handed 25 years after the High Court special chamber for international and transnational crimes found him guilty of Genocide crimes.

The charges, which he denied include: involvement in the massacre of Tutsi who were hiding at former Ecole Technique Officielle (ETO Kicukiro) in April 1994, as an influential member of the then ruling party, Mouvement Révolutionnaire National pour le Développement (MRND).

In these charges, testimonies from survivors of the killings in Kicukiro showed that Iyamuremye was behind plans to gather and shift Tutsi victims from Sonatube to Nyanza in Kicukiro where they were killed by Interahamwe militias.

In reading the court verdict using video conferencing technology, judges spent an hour revisiting testimonies and consented that there was enough evidence to prove Iyamuremye’s involvement in the plan especially making sure that none of the victims escaped.

Through testimonies, the court said that Iyamuremye was also a powerful militia leader during the genocide and at several cases was seen carrying weapons and attacking the Tutsi alongside other militias.

Though survivor’s testimonies differed on dates, time, and details, the court said that their evidence cannot be trashed since most of them were not educated and there is the possibility of not being precise 27 years after.

The court ruled that Iyamuremye was guilty of participating in genocide activities and having the motive to commit genocide since there was no evidence to prove that he was forced by his fellow militia to take part in the genocide.

After examining evidence and legal provisions in the case, the court judge said that under normal circumstances Iyamuremye would get a life sentence but in this case, there is reason to reduce his sentence.

Some of the reasons include: that Iyamuremye was 19 years during the Genocide. The court said it was easier at that age to be incited to commit crimes.

Another reason is that Iyamuremye saved some Tutsi who had sought refuge at his home.

In his earlier defense, Jean Claude Iyamuremye, now 46 years pleaded not guilty saying that he couldn’t have committed genocide against Tutsi yet his mother was one of them.

By the time of the verdict reading, Iyamuremye had not responded to the ruling as he remained silent throughout.