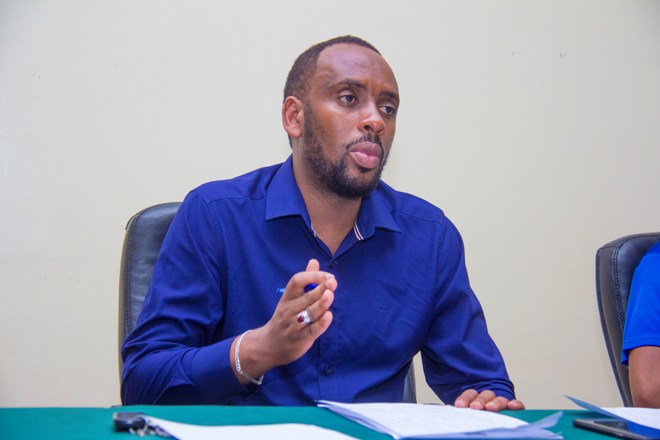 Forty years ago in Busoro town of Muyira commune, now Nyanza district, a son was born in a family of four and parents called him David Munyakazi.

He grew up in this community and went successfully through education and when the time came to choose a university path, he went for Construction Engineering.

But, way before going to university, Munyakazi was already in love and at 17 years, he became a father after going into a relationship with his girlfriend whom he would marry later on.

Last week, he spoke to KT Radio’s Jean Claude Umugwaneza and told him his story.

“I was born David, but I, later on, converted myself to Islam.  I dropped the name David for Sadate,” he said.

The latest name became a household name since 2019 when he became President of a renowned local football Club-Rayon Sports, and most importantly in 2020 when a crisis in management was reported in the team also known by fans as Gikundiro.

Munyakazi’s committee was suspended in September 2020 and replaced later on, but, before and after that event, his name increasingly continued to trend in social media, himself being involved in answering bitter messages against him.

Of recent, he even triggered more social media debates himself.

In all this, father of five Munyakazi said he discovered an even stronger love and support from his family, most importantly, from his dear wife.

“Never did I give up! My family at large and my wife, in particular, supported me really much. At the beginning when I was aspiring to the position of Rayon Sports leadership, my wife was not that supportive but with time, she understood that if people have trust in me, I indeed, should help them,” Sadate said.

Sadate boasts himself of having “put Rayon Sports in order” despite the heavy cost of “people who had tendance to abusing me.”

“I never surrender in front of those who fight me as long as I am convinced that I am leading a legitimate battle. In this context, my opponent is rather revitalizing me,” Sadate further said.

In all the struggle during the management of Rayon Sports, Sadate believes, “whenever competent public officials examined the matter, they endorsed my program and none ever said that I was wrong.”

Amongst Sadate’s memories are days he was arrested for mishandling one cow per poor family program – Girinka.

“I was detained at Muhanga prison for nearly 29 days, but later on I was given bail and found not guilty,” Sadate said.

“Much respect to my wife who was doing her level best to make sure that my life does not perish. In fact, while in jail, I couldn’t manage to eat, unless I had my favorite food, steak.”

Sadate is a Genocide survivor who lost his parents and his two siblings.

“Up to now, I failed to understand these atrocities. I can’t even manage to do something from the ruins of my family land,” he said.

Sadate is working on his weakness in his relationship with wife. He confesses that sometimes he is slow to establish something special with her.

“Sometimes I establish that for example, the dress she put the previous day was one of her best and when I share my compliments that late, my wife is like: how couldn’t you see that yesterday?” Sadate says.

Sadate supports tolerance in community and in his view, “people should learn to see the positive side of their neighbors, rather than always finding something that should ruin them.”