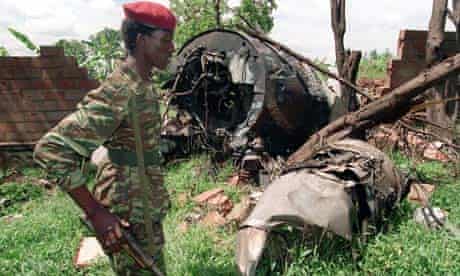 France’s highest court has dismissed appeals by Habyarimana family and co. to reopen an inquest into the plane crash.

France’s top court has rejected the final appeal by the family of former President Juvenal Habyarimana seeking to reopen an investigation into his April 6, 1994 downing of the plane in which he and other died.

The French Supreme Court of Appeal on Tuesday rejected the appeal lodged by the Habyarimana clan against the decision of the Examining Chamber of the Paris Court of Appeal which confirmed the dismissal by the Investigating magistrates of the case against Ms. Rose Kabuye and Messrs. Sam Kanyemera, James Kabarebe, Jacques Nziza, Charles Kayonga, Jacob Tumwine and Frank Nziza.

According to a statement by lawyers representing the interests of Rwanda, Leon Lef Forster and Bernard Maingain, the Rwandan military officials have been exonerated in the case instigated by controversial retired French Judge Jean-Louis Bruguière in 2006.

“It took more than 20 years of proceedings for the outrageous accusations made against them to be invalidated by the French courts thanks to the conscientious work of magistrates, investigators and experts, despite the initial “investigations” of Mr. Bruguiere which were tainted by a clear bias and a lack of knowledge of the factual reality of the events of the years 1990 to 1994 and even more so of the history of Rwanda itself,” the statement reads.

“We pay tribute to the people who were prosecuted in a totally defamatory manner and who unfailingly supported the fight led by the defence,” the statement adds.

Forster and Maingain said the defence was able to demonstrate the multiple manipulations and falsifications perpetrated by a coalition of different interests motivated by considerations alien to the search for judicial truth.

“This manipulation failed completely. The genocide was carefully planned and prepared by those who organised the coup d’etat of 6 and 7 April 1994 and those who helped them, these same people who were presumably involved in the attack on the Falcon. In any case, the judicial investigation into this case shows that this same group also tried – although in vain – to manipulate and distort the facts concerning the attack on the Falcon on 6 April1994.”

“At the end of these proceedings, which have a clear political overtone. The defence hopes that the fight waged on the legal front will also contribute to creating justice for the one million victims of the genocide of the Tutsis.”

Previous investigations by France and Rwanda concluded that the plane carrying President Habyarimana was down by Hutu extremists who were against the Arush Peace Talks.

Commenting on the latest development, the Rwanda Government Spokesperson Yolande Makolo said: “Today’s decision in France’s Court of Cassation puts an end to one of the biggest cover-up stories in recent history. Judge Bruguière’s massive 24-year scam on the 6 April 1994 plane crash is over and done.”