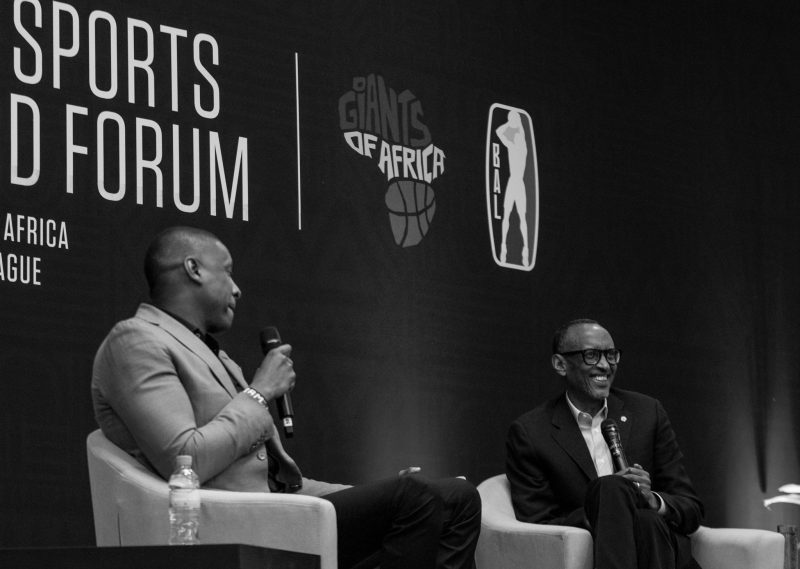 This morning, President Paul Kagame joined Masai Ujiri, President of the Toronto Raptors for a fireside chat during the Moving Sports Forward Forum, co-hosted by the Giants of Africa and Basketball Africa League(BAL).

Kagame said that BAL has become a reality in Africa though it started with discussions at different levels and an invitation for Rwanda delegation to attend the 2016 All Star Games at the NBA.

Masai Ujiri reminded the important consideration of President Kagame to Basket ball where he recalled the how, during the All star games, Kagame was seated with his head down and Ujiri wondered what was going on – his Excellency was cold or sick.

Ujiri inquired from the President if everything was okay. And Kagame put his head up and replied: “How much does it take to build an arena like this?”

From the question and answers that followed, Kagame and Ujiri underscored the fact that Rwanda has managed to build its first sporting arena- Kigali Arena- which was built in less than a year, but also remains an inspiration for sporting events on the continent.

“And now we have this arena here (in Kigali) which is inspiring even more on the continent- which is incredible,” Ujiri said.

The Kigali Arena has so far hosted the 2021 and now the 2022 BAL games which are kicking off in Kigali from May 21-28, 2022 following previous events held in Dakar and Cairo.

The games held in Kigali Arena have increased the love for sporting activities especially for basketball and also added value in the tourism sector as visiting players have to spend and stay in Kigali city.

Basing on this idea that sports is a catalyst for development, Ujiri asked Kagame what this means.

Kagame said that a sport has a life of its own and it goes beyond feelings, competition and pride of winning or low mood of losing, but in modern times it has evolved beyond feelings.

Kagame said that beyond this enjoyment, sports in Africa need to have three components – government, private sector and nonprofit organization- each playing its role.

Kagame said that all these elements coming together is what completes the cycle that “we in the end want to build in societies like ours. So Government is so important in the regard of creating an enabling environment, however the real investment is from the private sector.” 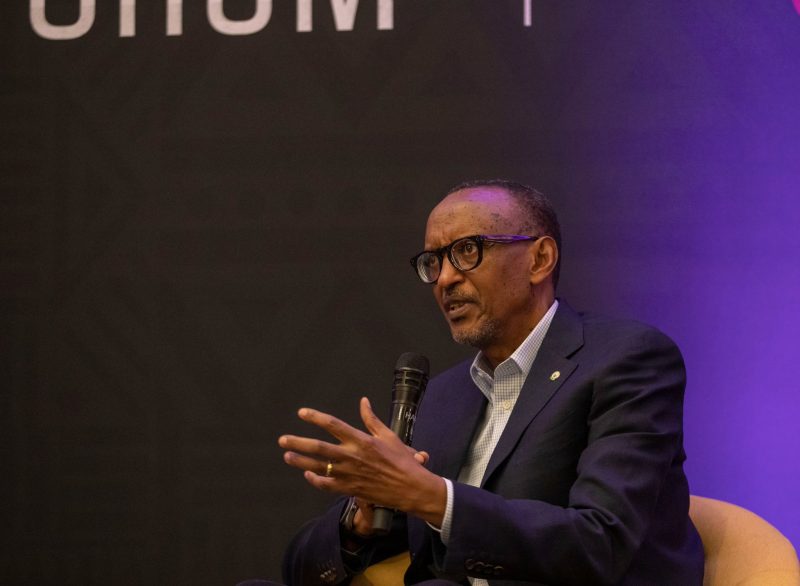 The President further said: “When it comes to the real investment to flow, the private sector and the nonprofit have a much bigger role because they are focused on things which make a difference for people and can take advantage of the environment in place.”

Taking this from Kigali to the regional level where the East Africa region has new member states like South Sudan and DR Congo, both Kagame and Ujiri agreed that sports has a potential of bringing in new energy in the region.

Analogically, Kagame said that as in business setting, a business thrives within a big market, the combination of all the EAC members as of today, and working together in growing sports-competition and investment, will bring in new energy in sports and thus regional development.

“It (EAC) is going to definitely put more energy into it (sports), more interest because there is a large population. So there are many things that are going to feed off each other and just keep going up,” Kagame said.

On the continental level, Kagame said that in order to promote sports, all parties have to start with the simple thing of giving youth an injection into the basics of sports- the space, the chance and infrastructure. 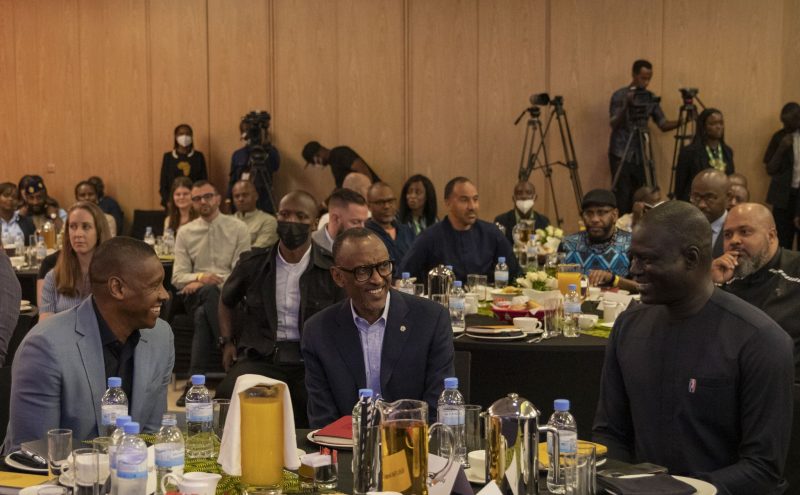 With a multi talented continent in sports, Kagame said that all that has to be done is to give you the space to use their energy in sporting activities, so that later they can use it to become better citizens.

Moving from what the host called serious side of the fireside chat, President Kagame(PK) also took from Masai Ujiri-(MU) in a range of personal questions on his life and love for basketball.

MU: Have you been watching the NBA playoffs

MU: …and staying up late?

PK: actually I did last night

PK: About half of…I watched Dallas and Golden State, but just the first half and I went to sleep thinking they had lost. When I woke up to come here, I checked and found Golden state had won.

MU: Do you have a favorite player in the NBA?

MU: Your favorite GM (General Manager) in the NBA?

Kagame responded that he had already mentioned Masai Ujiri as his favorite.

MU: How are you looking these days? Have you had the opportunity to shoot?

Kagame was frank on this question and said he has not been shooting of recent but his shoot may have become better.

After the conversation, President Kagame and Masai Ujiri launched a basketball court that was upgraded by Giants of Africa.

The president showed that Basketball is not a strange sport for him.

Learn From History, Defend Our Nation – Min. Bizimana to the Youth