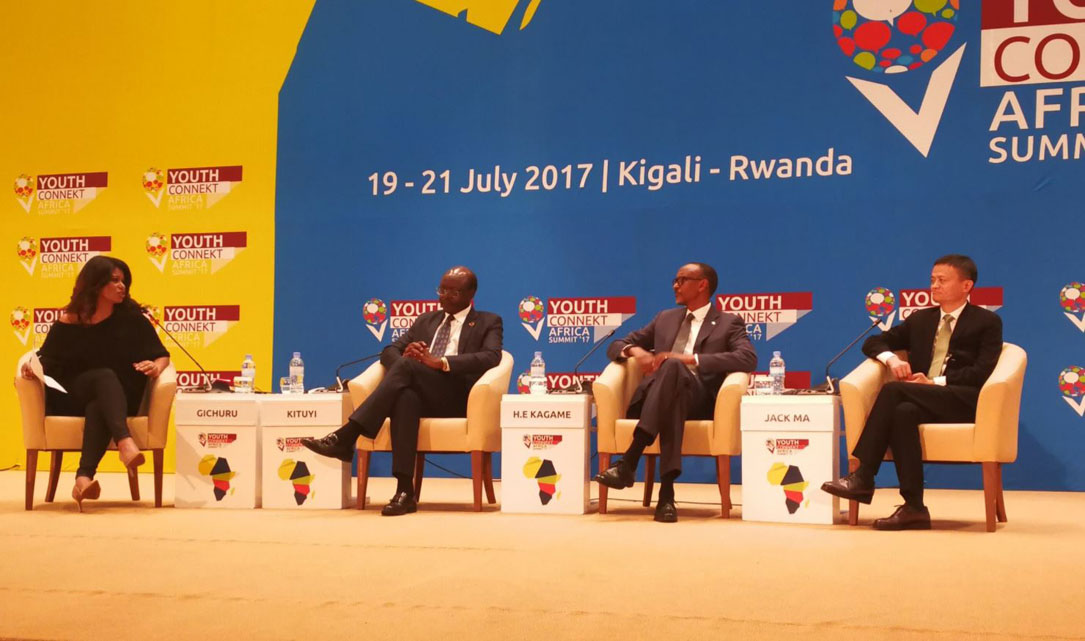 The billionaire arrived with a delegation aboard three planes that landed at Kigali international airport to attend the summit also attended by Rwanda President Paul Kagame.

Without beating around the bush, Jack took the microphone thanked delegates attending the summit.

Under project number one – Jack Ma has invited 200 African young entrepreneurs to work at Alibaba headquarters with the aim of gaining experience in fields including; e-commerce, Artificial intelligence and Internet.

The Second Project – the Chinese billionaire said Alibaba will work with Universities in Africa and governments to train specific courses including; Internet, Artificial intelligence, and e-commerce.

Jack Ma announced a third Project which he said is in partnership between Alibaba and Paradise Foundation of china – this project will deal with promoting and supporting Environmental conservation efforts in Africa especially protecting elephants and other precious animals.

“We will give a prize to 50 rangers for the next ten years to thank them for their tireless efforts in conservation,” Ma said.

In the Fourth and last project, Jack Ma said he wants to show his confidence in Africa and therefore pledged to invest in youth.

“I wanna show my confidence in Africa..so I start with my foundation to Africa entrepreneurship fund to support young entrepreneurs to realize their dreams,” he said.

Jack Ma said he will invest $ 10 Million in the fund, and added, “I believe more people will come in to support the fund and make it bigger.”

Alibaba’s market value is more than US$231 billion.

During an exciting closing panel that was made of President Paul Kagame, Jack Ma and DR Mukhisa Kituyi, Secretary-General of the United Nations Conference on Trade and Development UNCTAD, a lot was shared on what Africa needs to develop.

President Kagame made a listing of key priorities where free movement between Africans is on top of the list.

“No African in this room should go through the hassle of visa applications to learn from or do business with fellow Africans,” Kagame said.

Rwanda is among a few countries on African countries that provide visa at entry for all Africans.

Kagame said, “Denying people visa, it’s not a good thing. After all people will still go.”

Kagame said that allowing free movement for Africans within Africa is also about Africa integration.

“How do we talk about integration and again prevent people from moving?” he said.

The president said that this is the foundation of everything, and it is a matter of political will.

Other activities should come second, including infrastructure, and strong education, all reinforcing job creation spirit.

The US music star and businessman Aliaume Damala Badara Akon Thiam famously known as Akon who was called to join the panel listened to all the statements of Kagame and what he already know about him.

When he was given the floor to speak, he praised Kagame and said, “Every president should think like this man,” he said while pointing at president Kagame.

In a similar appreciation, other panelists asked the president never to allow the common narrative in Africa where some countries delay others in their regional blocks to implement some agreements that could help to fast track African development.

Earlier in the day, President Kagame met with Jack Ma and business men and women from China who were in Rwanda to attend Youth Connket Africa Summit.

“We are excited to meet you as a hero who has led this nation to this level,” said Jack Ma.