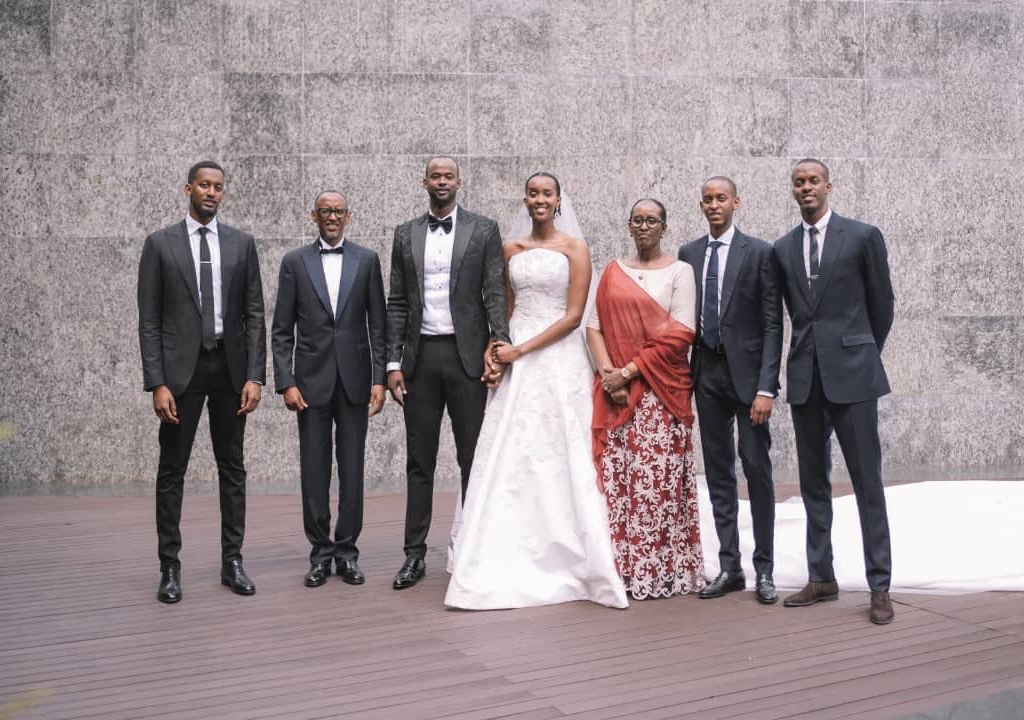 President Paul Kagame and his family during the wedding of First daughter Ange Kagame in July this year. Every member in this photo contributed smartphones in the #ConnectRwanda Challenge

President Paul Kagame says he challenged his family to join the ‘Connect Rwanda’ challenge, an initiative through which individuals or organisations are voluntarily pledging smartphones to be given to unconnected vulnerable households in Rwanda by the end of 2020.

The Head of State has led the way in the challenge which has since gone viral by pledging 1, 500 Mara smartphones on Saturday but through a late night tweet posted at 1:07am on December 24, President Kagame said that he challenged his family to be part of the challenge and they did.

Through the tweet, President Kagame also made interesting revelations that his youngest son, Brian, with money saved from his internship, pledged to buy 5 Mara Phones to be given to Rwandan households which don’t own a smart phone.

“Thank you to my family for accepting my challenge to play your part to #ConnectRwanda & donating @MaraPhones Jeannette donated: 27 & my children: Ivan: 23, @AngeKagame

In her own capacity, Ange had made an earlier pledge of 10 Mara Phones which she said would be given to People with Disabilities, through the National Council for Persons with Disabilities (NCPD).

“Thank you all for your commitment to offer Persons with Disabilities the smart phones that will allow them to easily access services, it is also a means of inclusion and removing barriers,” NCPD said through a statement.

President Kagame’s son, Ian, who graduated from U.S-based Williams College in June measured up to the challenge by donating 15 Mara Phones. The highly athletic third born was followed by the last born Brian who donated 5 Mara Phones from his internship savings according to his father.

According to MTN Rwanda, which kick-started the challenge with the Ministry of ICT and Innovation, by yesterday, more than 24, 000 mobile phones had been pledged by Monday but a quick count by KT Press shows that the donations have gone well above 26, 000 mobile phones by Tuesday morning.

The handsets will be given to vulnerable families. The Minister of ICT and Innovation, Paula Ingabire said that the drive is aimed at ensuring that each of the 2.88 households in Rwanda has a smartphone.

During a press conference with the CEO of MTN Rwanda Mitwa Kaemba Ng’ambi, who started off the challenge, Minister Ingabire said that the donations are not limited to Made in Rwanda handsets alone –other brands are welcome but donating Made in Rwanda phones is a double win.

On average, since the challenge started over the weekend, 8, 000 mobile phones are donated daily. It is expected that more than 360, 000 Smartphones will be collected in about 45 days.

Over the weekend, President Kagame said that the challenge is voluntary and should be seen as such. No one should be forced to donate.

MTN Rwanda and the Ministry of ICT and Innovation are leading the challenge which has drawn in international organisations, telecom operators and renowned individuals globally.

On top of pledging 1, 100 smartphones, MTN Rwanda will also equip the smartphones with a SIM card with 1GB of data every month for three months. The two entities will work with local leaders to identify beneficiaries.

Rwanda Laughs Off Call for War by Former Congolese PM