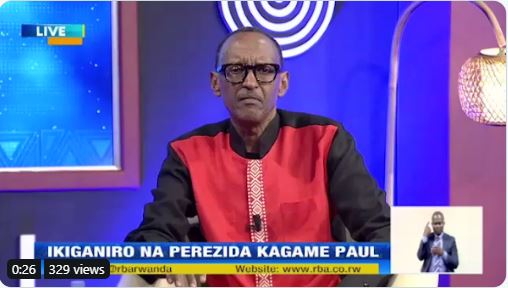 President Paul Kagame has spoken out on the recent message from his Ugandan counterpart Yoweri Kaguta Museveni delivered by a special envoy, mentioning that while there is progress in efforts to find peace between Rwanda and Uganda, the initiatives or message must be followed by goodwill.

President Kagame made the observations while appearing on a special end of year interview on Rwanda Broadcasting Agency (RBA) hosted by journalists Jean Pierre Kagabo and Gloria Mukamabano on Tuesday afternoon.

President Kagame addressed a range issues, including the country’s economic outlook, state of the East African Community (EAC) and the relations between Rwanda and Uganda and key highlights of the year 2019.

Asked whether the message carried by President Museveni’s special envoy Ambassador Adonia Ayebare on Sunday brought in some hope on the relations between the two countries, President Kagame said that hope is relative and there are several things to look at to see if there is hope or not.

He however said that there is some progress made, right from the time the two countries met in Luanda, Angola, in August and the subsequent meetings that focused on the implementation of the Luanda Memorandum of Understanding but many issues remain at play.

“People must find a solution to these issues, which is the channel we took, going to Luanda in Angola several times and facilitators from Angola and DR Congo coming here and going to Uganda with the sole purpose of finding a solution to this puzzle. This will continue,” President Kagame said.

He however added that so far there hasn’t been a solution but he has hope that it will be arrived at, adding that he has no doubt that both Rwanda and Uganda want peace –it doesn’t matter whether the two countries co-exist or not. At the end of it, all they want is peace, Kagame said.

“It is true President Museveni’s special envoy came to see me. We met and had discussions, adding to the already existing efforts but I cannot say that because the special envoy came, all of a sudden there is hope. I won’t put it that way,”

“But I can say it is yet another step towards finding a possible solution to whatever problem there is. It all comes out of people talking and exchanging views, which is why I cannot refuse to receive a special envoy whenever there is one coming. I receive them and accept the message and give them my own feedback,” President Kagame said.

He added however that whenever such a development happens, there is a need to say things as they are, putting on the table the key issues between the two countries, assessing all the challenges and their origins, which is what he did with Amb. Ayebare.

“We had frank discussions on the issues at hand but that alone is not enough. There must be some actions to accompany the talks,” the Head of State said, adding that Rwanda sticks to the two issues which it believes if addressed can restore much needed peace between the two countries.

“The issue of arresting Rwandans of all walks of life on a daily basis, torturing them, depriving them of their possessions, for no particular reason, just persecution out of hate, not one or two people, hundreds or thousands, just hunting down nationals of another country, is something we have never understood on our part,”

“For some, they say they were arrested for spying. Spying on what? What kind of spying involves children, women and men, some of whom don’t even know how to write? Ordinary eople just looking for means of survival like many Ugandans here in Rwanda,”

“You know them, they live here in Rwanda but we don’t touch them. If we wanted we would do the same, hunt them down, tell them that they are spies, take away their documents and jail them as it is done for Rwandans in Uganda but we don’t do that. It was not necessary. I don’t understand how neighbors can co-exist like that,” President Kagame said.

On the second issue, President Kagame said that Rwanda has been consistent on questioning Uganda’s actions to accommodate people who fled Rwanda for one reason or another and set camp in Uganda from where they engage in acts to destabilize the country.

The Head of State said that if those two issues are not addressed, issues between the two countries will not be resolved soon.

He equated issues between the two countries to two neighbours who live in grass thatched but play with fire, risking torching their abodes.

President Kagame however said that no efforts can destabilize Rwanda, with or without support of neighbours, citing attacks repulsed this year in Northern and Southern Provinces. He said Rwanda maintains an open door policy for exiles or members of armed groups who wish to return home, but will effectively deal with those who want to use violence.

EAC doing well, not so well

In light of ongoing tensions between EAC partner states, President Kagame, who is the current chairman of the EAC said that the regional bloc is doing well, though it should do better than it is at the moment.

“EAC has been doing well and it should stay like that. We all know the history and progress made so far. There is a lot more we gain from integration as member states,” President Kagame said, adding that all countries understand the benefits but at the end of the day, individual or national interests come into play.

“Some want to have it all, others want to gain more than others yet we can all gain at the same time. We also have tensions between countries, some of them emanating from long standing issues, but through integration, all these can be dealt with,” President Kagame said.

“But in general I can say that our bloc of the East African Community is doing well, though it should be doing much better than it is doing at the moment. As I said we have individual interests and egos here and there but our wish is to see a more united and stronger EAC. Unfortunately it doesn’t happen automatically as you wish it to be,” he said.

He said that you can’t ‘program’ people to do as you wish but these are some of the issues that need to be addressed as soon as possible.

The Head of State discussed a number of issues including the performance of the economy and different sectors including the economy, role of youth in the country’s development ambitions and the recent initiative dubbed “Connect Rwanda” aimed at ensuring that every Rwanda household has a smartphone.

He also discussed a wide range of issues including democracy which is often seen as a one-size-fits-all, a notion he often rejects and Rwanda’s deals with European football giants Arsenal and PSG which he said have paid off tremendously.