Rwanda and Uganda need the political will on both ends to address outstanding issues both countries have highlighted if relations between the two countries must go back to normal.

This was said by the Minister of Foreign Affairs and Cooperation Dr Vincent Biruta on Thursday at the end of the 4th Ad Hoc Commission meeting bringing together delegations from both countries and facilitators Angola and Democratic Republic of Congo (DRC) which was held virtually.

The two countries went back to the drawing board to assess progress on the implementation of resolutions made by the 4th Quadripartite Summit of Heads of State at Gatuna/Katuna Common Border on February 21.

Addressing a press conference after the meeting, Dr Biruta said that Rwanda emphasised key concerns to Uganda, mainly rotating around Rwandans who continue to be arrested, tortured and detained incommunicado in Uganda.

“As you might be aware, we have raised these issues with Uganda on different occasions, including the continued arrest and torture of Rwandans who are held in unknown detentions, sometimes releasing them after a long time,”

“There are issues relating to continued aggressive media propaganda targeting the Government of Rwanda and the country’s leadership and many other issues which we have previously discussed in different meetings. The last summit gave a direction on how these issues can be addressed,” Dr Biruta said.

He however added that despite some progress made in the implementation of Heads of State summit, some of the challenges remain in place, pointing out that Uganda has committed to take action beginning with the release of 130 Rwandans next week, adding however that there is a need to do more.

“They will be released next week. This is a good step but there are other issues we raised which they need to work harder on to address, mainly the aggressive media campaign against Rwanda and the arrests which haven’t stopped, much as they are planning to release some people next week,”

He said that every week there is a Rwandan arrested and tortured in Uganda, pointing out that this must stop with immediate effect.

“We concluded that there is still a lot more Uganda has to do if relations of the two countries must go back to normal, much as we are seeing this progress,”

“For that to happen, we need to have political will. If there is no political will, then we will not get anywhere. We agreed that there is need for political will on both sides and if there is an issue that needs to be addressed, it is frankly discussed and resolved,” Minister Biruta said.

He pointed out that Rwanda has appreciated actions such as the deregistration of terrorist outfits such as Self-Worth Initiative which masquerade as NGOs while mobilising and plotting against the government of Rwanda.

Dr Biruta said that though the outfit was deregistered, it still operates Rwanda National Congress (RNC) cells in Uganda, something he said goes against the Government of Uganda previous commitment of disbanding the activities of the said criminal organization.

He said there are on-going mobilization activities in different parts of Uganda to support RNC and other different negative forces that continue to receive the support from Uganda’s Security Organs. 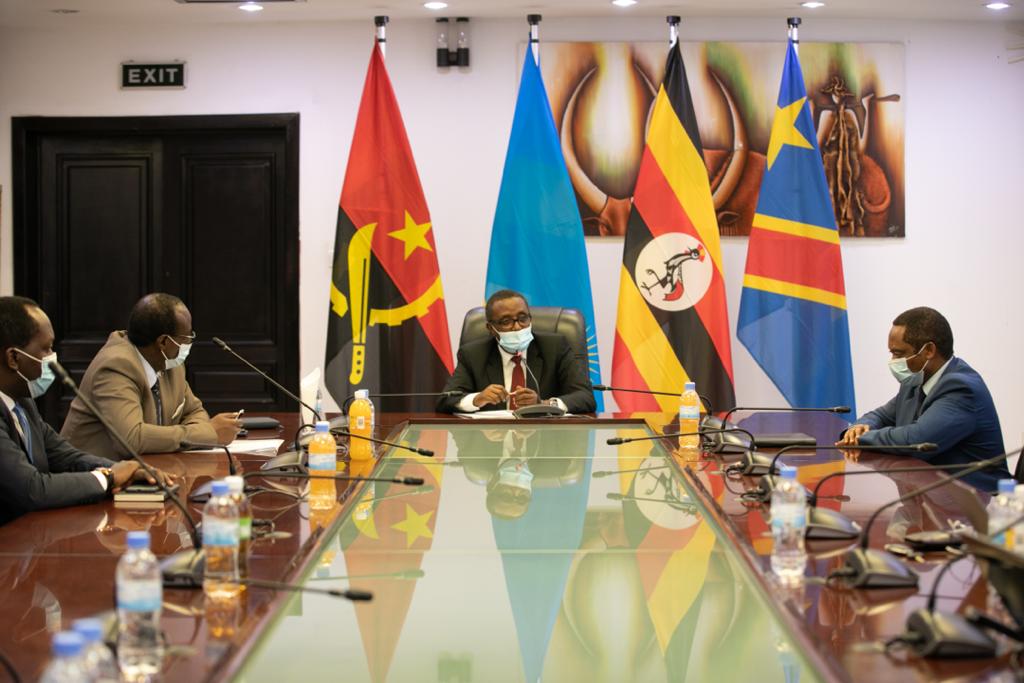 On the issue Uganda raised of its citizens who are reportedly detained in Rwanda, Dr Biruta said that Rwanda advised Uganda to file a formal list of these people but this is yet to be done.

He said that Rwanda has formally submitted lists of her citizens detained in Uganda but they are still denied justice and a right to be accorded consular services yet Rwanda has done the same to Uganda nationals in the country.

Dr. Biruta said these individuals must be accorded consular services and allowed visits by their lawyers.

Minister Kutesa said the details of those in detention will be shared with the Government of Rwanda but did not say if they will be accorded visits and consular services.

Sam Kutesa said that while the 130 will be released next week, another 310 Rwandan nationals charged with capital offenses will remain in custody.

No Heads of State Summit

Unlike in the past where Ad Hoc Commission meetings set the agenda for the Quadripartite Summit of Heads of State, this time the two countries did not lay ground for the next meeting of leaders but instead agreed on issues which must be addressed first before the next meeting of HoS.

Dr Biruta said that it is not abnormal that this time they did not recommend a meeting of Heads of State and that it is not a sign that there was no progress in the talks, but rather the most important thing was to acknowledge that there are issues that need to be addressed before the next HoS meeting is recommended.

Earlier in the opening ceremony, Minister Kutese also raised some of the counteraccusations Uganda has against Rwanda but said that his government was fully committed to discuss these issues with Rwanda and find a solution aimed at normalizing relations between the two neighbors.