Where the Rwanda-Uganda poor relations are concerned, there will always be tales. Often times we see people intending to say something, but nowadays the number of those saying nothing has gone up. Take this one Jean K. Rutagambwa who recently wrote in a Ugandan publication (commandonepost.com) that Rwanda uses ‘Munyangire.’ He falsely claimed that as a matter of policy the Kigali Administration encourages Rwandans to return the hate meted out on their government. He made reference to an opinion article I wrote during the French President Emmanuel Macron’s visit to Rwanda, particularly where I dismissed Ingabire Victoire Umuhoza’s position that France’s leader should never have made the trip because Kigali allegedly violates human rights.

Back then I said, and still maintain to this day, that “Munyangire is bad”. https://www.newtimes.co.rw/news/macrons-confidence-trips-ingabires-hatred. Ingabire’s frustrations that President Macron sees Rwanda from a perspective totally different from hers had earlier been covered in The Guardian. She hates her country’s government, Ingabire Victoire, and wanted the French President to take her very reasons grounded in vendetta, make them his, and hate in exactly the same way. She lost out, and so will all those with similar thoughts.

In the opinion of Jean K. Rutagambwa, I should never have criticized Ingabire Victoire since according to him my own President “has called for the same Munyangire against President Museveni and Uganda as a country, just because relations between the two countries are frosty.” This is true and false. Indeed relations between Kigali and Kampala have been hostile for some time now, so the frosty term is quite accurate. Yet there is a gross falsehood in saying that anyone at the top this side of the divide calls for hate. If any one of the two countries’ leaders has openly and consistently called for restoration of friendly bilateral relations, it is the Rwandan President. He is on record for repeatedly challenging his Ugandan counterpart to a round table for talks. There is no stronger demonstration of the political will on the side of Rwanda to amicably resolve differences than the consistency with which the Rwanda Head of State publicly calls on his counterpart to table Kampala’s grievances for discussion. Each time President Kagame accuses Kampala of supporting Kayumba’s RNC and FDLR, he challenges them to come up with their own complaints, if any. And each time their response is that Rwanda vigilantly spies on them. You wonder whether Uganda supports anti-Kigali armed rebels because Rwanda spies on Uganda, or it is vice versa, whereby if it is, then you now know which side should stop first for the other to stop too.

If Jean K. Rutagarama was a genuinely well meaning person who wanted to see the Rwanda-Uganda relations heal, he would have been paying attention to the statements President Paul Kagame frequently makes in relation to what is wrong. For instance four months ago on 1st May 2021 at a meeting with RPF senior cadres at the party headquarters, the President for the umpteenth time admitted to not knowing what exactly his former ally is up to. 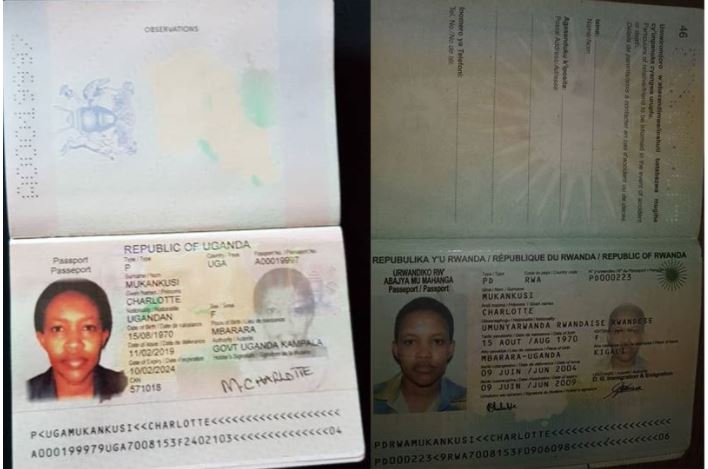 Supporting RNC. The Ugandan passport(Left) that was recently given to Mukankusi and her expired Rwandan passport

“The neighbor north is the one who still has a problem with us. Up to now I have failed to understand the root cause of the problem with us. I lived in that country and worked with its people and leadership for long, but still it has not helped matters in finding our way through”. President Kagame said this after literally reveling in the fact that Rwanda now enjoys good relations with all the other four members of the East Africa Community and DRC.

As a promoter of social harmony, peace and security both at regional and continental levels, Rwanda has always wanted best relations with all its neighbours, strongly believing that Africa will only prosper sustainably when countries are able to engage fully in business with each other in a fair and transparent manner. In situations where Uganda blatantly undermines the security of Rwanda as well as sabotages its economic efforts, it becomes impossible to maximize existing inter-trade opportunities which Rwanda and Uganda need to exploit. This is how President Kagame put it as he addressed the 16th Rwanda National Dialogue (Umushyikirano) on the 14th of December 2018.

For Jean K. Rutagambwa’s information, people have noticed a stark contrast between Kigali and Kampala when it comes to talking about the blood and the so-called mutual effort to put things right. In the history of it all, there is no trace of a public statement or any type of communication in the open anywhere initiated by President Museveni, in which the Ugandan leaders is seen calling upon Rwanda for conflict resolution engagement. Every time it is Rwanda that complains, makes accusations, backing them with evidence, and calls for amicable settlement of issues, to no avail.

Uganda on the other hand never denies, or when it does, the evidence from Rwanda is always too overwhelming to escape. Many times Uganda has promised to go check its side with the aim of coming clean on the accusations, and each time it has returned in a negative score. Over time Uganda has looked like a promiscuous lustful man who cannot resist the lure of a harlot in the neighbourhood and thus keeps sneaking out at night to go and lie low with her. That harlot is RNC/FDLR. There is no better explanation for failing to desist. It is prostitutional pull at play.