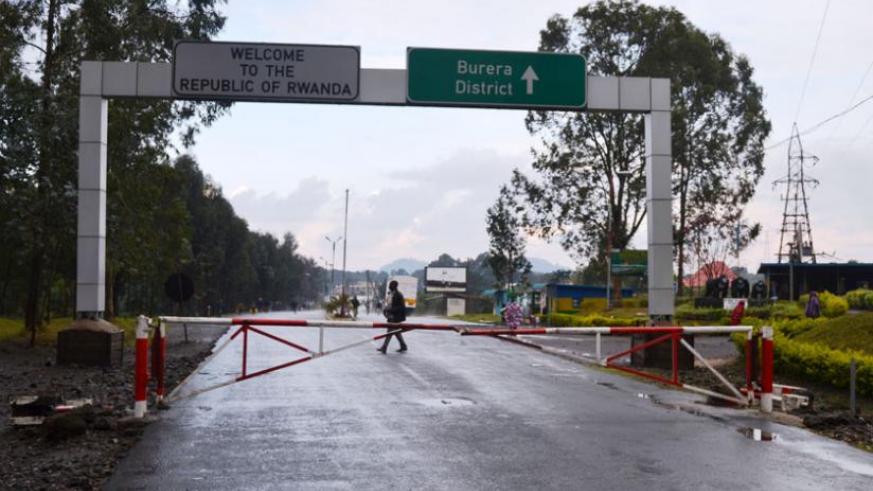 Rwanda says that two Ugandans who were arrested in Burera district on November 11 were smuggling goods into the country through a porous border point.

The Minister of State for Foreign Affairs in Charge of the East African Community Ambassador Olivier Nduhungirehe on Monday dismissed reports in Ugandan media that the arrest of Gilbert Beingana, 24, and Amos Tibesiga, 50, who hail from Butanda Sub-county, Kabale District has caused panic.

Reports claimed that border residents on the Ugandan side “were in panic” after the two men were arrested inside Rwanda. Minister Nduhungirehe wondered why the arrest of two smugglers would be a cause for panic among Ugandans.

“Really? So, there is “panic” in Uganda when two smugglers using ILLEGAL border points are LEGALLY arrested by the @Rwandapolice in #Rwanda?” Minister Nduhungirehe wondered.

Dismissing the panic claims, Nduhungirehe, commenting on a tweet by NTV Uganda asked about the hundreds of Rwandans jailed inside Uganda.

“And what about the hundreds of Rwandan citizens who LEGALLY travelled to Uganda but were ILLEGALLY arrested and tortured in CMI jails?”  he wondered.

Rwanda says hundreds of Rwandans remains incarcerated illegally inside Uganda with no effort to formally charge them or send them back home.

According to sources, Beingana and Tibesiga were smuggling goods into Rwanda, including food stuff before they were intercepted by police. The duo was arrested and transferred to Burera district. Their case is being handled by the Immigration Directorate.

They were arrested a day after Rwanda National Police shot dead two suspected smugglers on November 10. Job Ebindishanga and Bosco Tuhirirwe from Kamwezi Sub-County were fatally shot by Police as they crossed into Rwanda through a porous border in Tabagwe Sector Nyagatare district.

Their bodies were handed over to Ugandan authorities last week. Uganda sent a protest note to Rwanda over the incident. Rwanda urged Uganda to ask her citizens to use legal entry points and desist from smuggling goods into Rwanda.

Delegations from Rwanda and Uganda were supposed to meet today to discuss and assess the implementation of the Luanda Memorandum of Understanding aimed at ironing out differences that have led to tensions between two countries but the meeting was called off on Kigali’s request.

Minister Nduhungirehe told KT Press that Rwanda awaits Uganda to suggest a new date that is convenient for both countries.

He reiterated that the meeting is not about the opening or closure of the border as Ugandan media has been suggesting, pointing out that the MoU is clear on issues that need to be addressed.

“The meeting is about the full implementation of the Luanda MoU. The main provisions of this agreement are related to sovereignty and security of our countries, and to respect the fundamental rights and freedoms of citizens,”

“This is what was discussed in Kigali in September and any other issue, including that related to the border, was postponed to the next meeting in Kampala,” Nduhungirehe told KT Press.