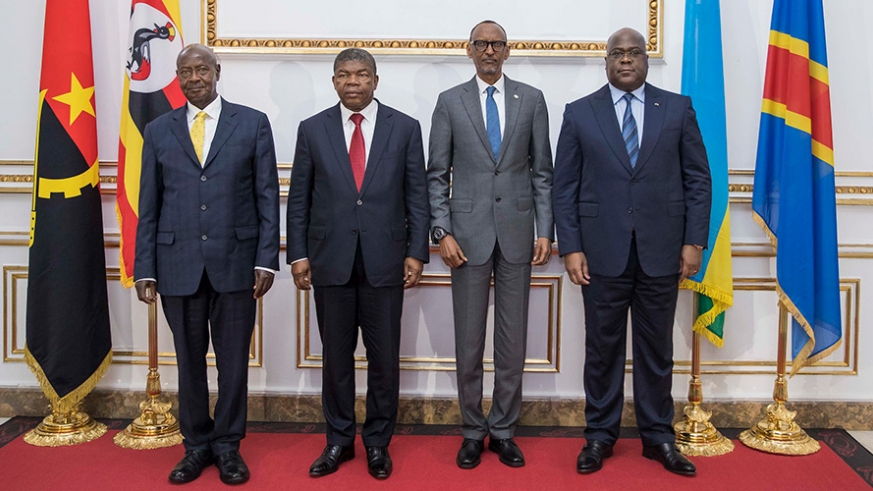 Heads of State at a previous Quadripartite Summit.

A lot is expected from a meeting of regional leaders to be convened virtually tomorrow, bringing together the leaders of Democratic Republic of Congo (DRC), Rwanda, Uganda, Burundi and Angola to discuss peace in the Great Lakes Region.

The meeting which will take place on Wednesday, October 7, 2020 is part of the initiative by DRC President Felix Antoine Tshisekedi, to convene a meeting of regional leaders to discuss security matters and the simmering diplomatic and bilateral relations.

The Ministry of Foreign Affairs and International Cooperation confirmed to KT Press that the meeting which had earlier been scheduled to take place in Goma, Eastern DRC, will take place virtually this time, with all countries expected to be on board.

In September, President Tshisekedi invited President Paul Kagame of Rwanda, his Ugandan counterpart, Yoweri Museveni, Burundi’s Evariste Ndayishimiye and Angola’s João Lourenço in what was expected to be a physical meeting of the Heads of State to discuss regional matters.

However, the meeting has not been able to take off due to many reasons, mainly surrounding busy schedules of Heads of State as well as the New Coronavirus restrictions which made the organisation of the meeting difficult. According to the organisers and hosts, DRC, the meeting will focus on peace, security, diplomatic and political relations.

Burundi had previously pulled out of the summit which was expected to address some of the existing issues in the region, mainly regarding peace and stability. Sources say Bujumbura has agreed to the virtual summit. Bujumbura said that it values bilateral talks between Burundi and neighbours rather than a joint summit. It is not yet clear if the position of the Burundian Government has changed.

The meeting comes at a time when relations between regional countries are not at their best. Rwanda has maintained that it remains ready to work with neighbouring countries especially Uganda and Burundi if they are willing to address some of the challenges that have affected relations.

Experts say if President Tshisekedi pulls off the meeting, it will be a major step towards fully restoring peace in the Great Lakes Region and could address all the security-related challenges and thaw relations between states.

Since taking office in January 2019, President Tshisekedi has expressed the willingness to restore relations between Kinshasa and neighbours in an effort to pacify the region and end decades of conflict particularly in the Eastern part of the mineral-rich country which has been ravaged by years of conflict and violence.