Pressure is mounting in the education sector, KT Press has established from a trusted source.

The Ministry of education is working around the clock to ensure that the revised academic curriculum begins with the next academic year 2016. “Heads are rolling,” the source said. “It is a must do.”

Competency-based curriculum allows instruction, assessment, grading, and academic reporting that equips students with the knowledge and skills they are expected to learn as they progress through their education.

On the other hand, the knowledge-based was helping students amass a heavy load of information, but with no clue how they will use it to address problems.

The revision of this policy, supported by UNICEF and the UNPF, was expected to be ready by December 2014, but was not achieved.

The country is investing heavily in skills development to address its development agenda, achieving a middle class economy by 2020, which is largely dependent on skills.

And the ministry of education is being pushed on the wall to have the curriculum up and running as matter of urgency.

Meanwhile, the revised curriculum embeds use of information communication technology (ICT) as the key driver of the agenda.

Nkubito Bakuramutsa, IT advisor to the Minister of Education, told KT Press early last month that, “The focus is to bring access, quality and relevance to the education sector through the use of technology.”

Nkubito was referring to the recent purchase of 150,000 Positivo-BGH laptops from Africa Smart Investment Distributor (worth ~$45 million), which will facilitate the teaching and learning process.

More computers will be purchased by teachers and parents for their students at subsidised rates and installment arrangements.

As indicated by the 2014 Education Statistical Year Book released in March 2015, the new curriculum faces serious challenges, especially access to computers and internet connectivity, as major tools for implementation.

The figures are gloomy, as illustrated in the tables from the research. As illustrated in the table below, 78% of secondary schools have access to computers while 17% of all secondary schools have access to internet connection.  It also indicates that 32 students use one computer, while the ratio stands at 16 for teaching staff and at 2 for administrative staff. 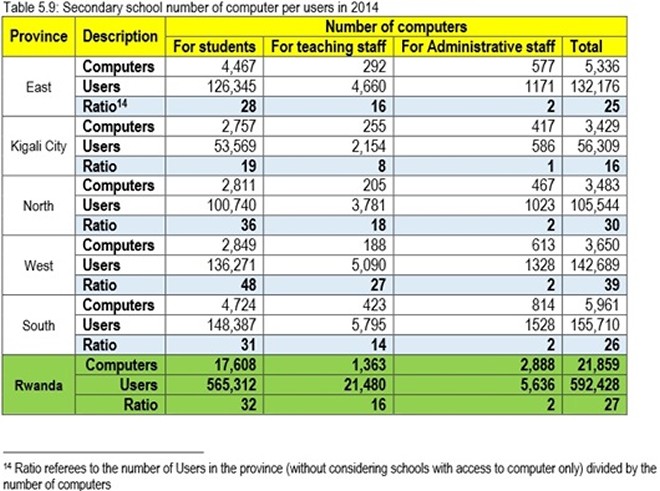 The 2014 education data also reveals that 68 % of VTCs have computers, while 25 % of all VTCs have access to internet connection. Table below shows that 18 trainees use one computer, while the ratio stands at 7 for trainers and at 2 for administrative staff.