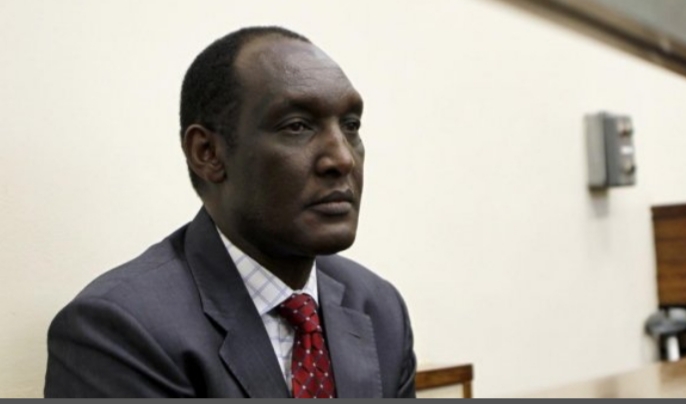 Kayumba Nyamwasa is the latest to appear in Uganda Government-run paper The New Vision.

On Saturday, 4 May 2019, the Uganda Government paper The New Vision published a long front-page Q & A piece, “Nyamwasa: Why I fell out with Kagame.” Kayumba Nyamwasa is the South Africa-based convicted fugitive leader of the Rwanda National Congress (RNC). Tribert Rujugiro, the RNC financier with tobacco business interests in Uganda, has also appeared in similar puff-piece interviews in the Uganda media. So has David Himbara, Rujugiro’s Canada-based publicist and Leah Karegeya, an RNC official and widow of Patrick Karegeya, RNC co-founder, along with Nyamwasa. As Museveni tightens his stranglehold on the Ugandan media, threatening to incarcerate journalists, space increasingly being denied real journalists is filled with RNC promotional material, whose aim is to get Ugandans to support the Museveni-RNC Rwanda destabilisation project.

A reader of those interviews will note an interesting pattern. The RNC officials’ disdain for President Kagame on whom they heap all kinds of abuse is in stark contrast to their adulatory praise of President Museveni, who they see as saviour who will take them to the Promised Land. After reading all these puff-pieces, one gets the inescapable impression the RNC has become the official NRM mouthpiece, especially at a time when Museveni has a diminishing number of people within the country willing to speak up on his behalf given his excesses and scandals that continuously come to light.

These RNC Museveni-panegyrics paint him as the deserving regional Godfather. Just last month in their pretentious piece on her, Leah Karegeya touchingly told The New Vision: “President Museveni is highly respected in the region and many Rwandans, including myself, perceive him as a father.”

As a supposed Godfather for all, everyone is supposed to be grateful and pay tribute to Museveni. According to Leah again, “He (President Kagame) does not remember the support President Yoweri Museveni gave to Rwandans!”

Nyamwasa too speaks of the “sacrifices” that Museveni made in support of the RPF war that President Kagame has failed to recognise. “If Uganda was supporting me, they would not be in power. They know very well what happened when Uganda supported them although they deny it.”

Moreover, no one is supposed to remind Museveni about the things that President Kagame and fellow Rwandans have done for him. These include carrying a disproportionate weight, extending to heavy loss of life in battle of many young Rwandans to put him in power.

This mutual overhyping of RNC bigwigs by Museveni’s media and of Museveni by RNC officials is fascinating. Kayumba, for instance, ignores the fact that Museveni has hit a political dead-end at home and is reduced to assassinating anyone he perceives as a threat to his increasingly shaky hold on power and his plan to eventually engineer his succession by his son. All indications suggest Museveni is unable to save himself from this impasse, which explains his treatment of opponents like MP Robert Kyagulanyi Ssentamu, more popularly known as Bobi Wine, and Colonel (rtd) Kiiza Besigye, for instance.

Yet, ignoring the political dead-end in which Museveni himself now finds himself, Nyamwasa and his RNC colleagues solicit – in fact know they can count on their Godfather – Museveni’s support in “solving the Rwandan political impasse!” Whatever that means!

What kind of support does Kayumba and his RNC need in order to admit that Museveni is indeed the Godfather who is helping them? Along with Museveni they orchestrated his and Karegeya’s flights from Rwanda. Museveni’s young brother Salim Saleh and Kale Kayihura picked up Kayumba after he had crossed the Rwanda-Uganda border. Museveni then facilitated his relocation to South Africa.

Three years and nine months earlier, in November 2007, Karegeya had fled Rwanda in a similar fashion through the porous border around Rwempasha. Waiting for him across in Uganda was Colonel (now Major General) Leopold Kyanda, at the time the head of Uganda’s Chieftaincy of Military Intelligence (CMI). Kyanda transported Karegeya to Rubare and then on to Mbarara, where he kept him under-cover for a few days fearing the public relations fallout were it discovered that such a high-profile fugitive was in Kampala during the Commonwealth Heads of Government Meeting. Soon after – again with Museveni’s support – Karegeya was similarly relocated to South Africa.

On 25 February 2010, Kayumba Nyamwasa (who was for a long time in constant contact with Saleh while in Rwanda Government service at home and abroad) followed in Karegeya’s steps, fleeing to Uganda via the two countries’ porous border and proceeding towards Kampala. Two Land Cruiser jeeps with red Uganda Government number plates met him in Masaka from the direction of Kampala. Inside one of those vehicles was General Salim Saleh, Museveni’s younger brother, who had come to pick up Kayumba; the two drove off together towards Kampala.

After meeting with Museveni’s senior security officials, including Saleh, Kayumba was driven to the Busia border with Kenya from where he later connected to South Africa.

Surely, this shows support for fugitives. Moreover, the 31 December 2018 UN Group of Experts Report also confirms that Uganda is a key hub of a network that recruits for the P5 coalition of rebel forces led by Kayumba Nyamwas. In addition to Kayumba’s own RNC, this coalition of negative forces includes AMAHORO-PC, FDU-INKINGI, PDP-IMANZI, and PS-IMBERAKURI. Indeed, Museveni himself admitted in a March 2018 press conference at Entebbe that his security forces have been facilitating the recruitment of RNC rebels, “A group of Banyarwanda was being recruited through Tanzania and Burundi to go to Congo. They said they were going for church work, but when they were interrogated it was found the work wasn’t exactly religious. It was something else,” Museveni told journalists.

Further, Museveni also admitted that he had met Charlotte Mukankusi, the RNC envoy for diplomacy, at State House. She had asked him to support the RNC in their “resistance” against Rwanda, according to Museveni’s open letter, ostensibly addressed to President Kagame but leaked to the media this March. His response to her request, “We are together,” as he gave her advise to reinforce links and coordination with the FDLR to destroy Rwanda’s infrastracutre: army, security, and government.

In the same letter Museveni admitted to have “accidentaly” met another RNC official Eugene Gasana, a former diplomat of Rwanda in NY. He also admitted to meeting the group’s financier Tribert Rujugiro.

Museveni wrote to Kagame that RNC “wanted us to support them to resist your excellency.” While he claims to have responded in the negative, the contrary is true. His support has been in the form of providing passports to ease their travels on the RNC’s anti-Rwanda work; it includes giving them access to meet him, which lends them diplomatic support; and involves letting them establish businesses in Uganda that they use to generate the means to finance anti-Rwanda activities. This support has now extended to mobilizing Ugandans to come on board in support of the RNC. So, what other support does Kayumba need in order to establish that Museveni is deeply supportive of their agenda?

Interestingly, Museveni knows that Kayumba cannot achieve anything beyond using him as a propaganda tool against Rwanda. Whether Museveni continues to support him or he eventually comes to his senses and abandons to carry his own cross, all Kayumba is capable of achieving is terrorism for which he, like others before him, will be arrested and handed over to face justice.

Kayumba, whom Museveni’s media is puffing up, has been indicted on terrorism charges related to the setting off of grenades in crowded markets and bus and taxi stops and parks in Kigali that killed and maimed many innocent Rwandans. Therefore, to understand the implications of this Uganda media campaign Museveni is orchastrating, imagine Rwanda giving broadcasting space to the head of the ADF!

What’s clear is that we have come to a paradoxic point. Even as Museveni gags his media on internal Ugandan developments that put his failures into stark relief, he is giving more and more space in the same media in praise of a terrorist outfit.

Why these days the elders get unwise as they turn into grans….so Museveni aims to destabilize Rwanda only because his support to RPF is less considered or because Kayumba and his criminal circle are the ones who will regard Uganda as a big boy when museveni facilitate them to violently overthrow democratically elected government??

This is the cause why Uganda may opt for war against a sister country??

Does that has any concern with a common mwananchi living in Nyagatare farming and grazing????

Well,someone tell Ugandans that no sweet war has ever been in its all forms,however should their old president opt for war,no one Uganda has ever won against Rwanda since 4th century