The Kigali show is among a series of the singer is scheduled to commence on 30th April, from Nairobi, Kenya under Afro East Carnival.

Harmonize released the schedule on Tuesday March 29 via his official social media platforms as one way to give heads up his fans across the globe.

Harmonize last performed in Rwanda in 2018, courtesy of The Mane music house and he also recorded a song with local female singer Marina.

Former Tanzanian president John Pombe Joseph Magufuli(RIP) was a diehard fan of Harmoniza. In fact in several state functions, the fallen head of state was seen grooving Harmonize songs and he even urged youth to learn to work hard from scratches like Harmonize to develop.

Rajab Abdul Kahali popularly known as Harmonize is a popular name not only in Tanzania but the entire Africa. He is a Tanzanian Singer, songwriter, and dancer.

His genre of songs is a mixture of Afropop and Bongo Flava. The Bongo star now has his own label the Konde Music Worldwide Label, where he has signed a budding talent Ibraah and is yet to sign even more talents.

Harmonize is one of the musicians who were brought up under Diamond Platnumz’ Wasafi Records (WCB) and late left the company. The award-winning Bongo artiste came to limelight when he collaborated with Diamond Platnumz on a hit song “Bado.

The Afro East Carnival will start from Mombasa-Kenya and proceed to Burundi, Dar Es Salaam, Uganda, Rwanda and close the curtain in UK. 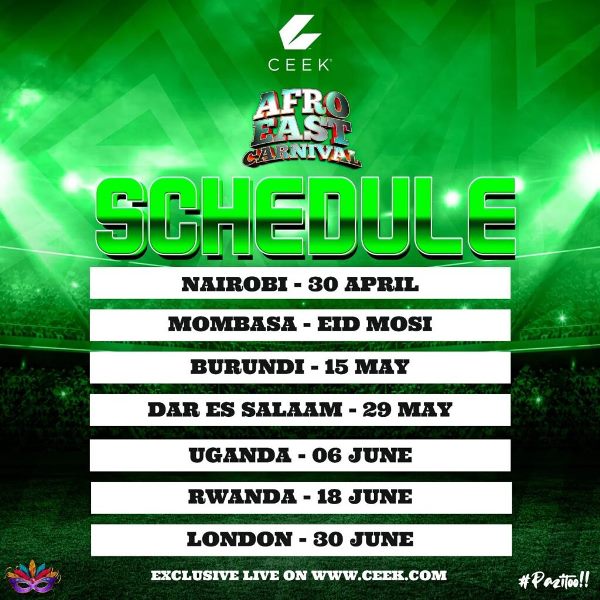